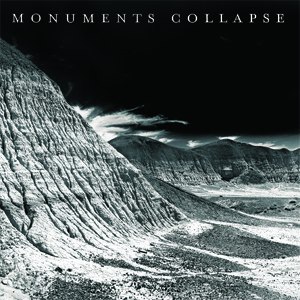 Post-metal is a genre I find difficult to listen to. I own a number of post-metal releases, but I find it hard to really get into the genre. Not so much because I can’t really enjoy a good song that lasts longer than most sxe-records I own. No, it’s because in my opinion there is a small line between writing a very good post-metal song and boring the shit out of me.  What I expect from a good post-metal song is a slow build up and relying more on mood than on the technical abilities of the individual players. Actually, coming to think of it, a post-metal song to me is all about the mood it gets you in. During the aforementioned build up I expect to get relaxed, perhaps a bit melancholic. At some point during the song I want to realize that the song actually grabbed me by the throat. The song then builds up the tension only to be released in a big climax. And I really don’t mind this happening a couple of times during one song.

Wait? Did I just get down to paper what Monuments collapse managed to do during their two song, but over 36 minutes lasting, self-titled album? I think I did… Monuments collapse brings us two songs, both sounding melancholic, building up slowly, both with several releasing crescendo’s. Both songs have enough twists and turns to remain interesting throughout the song while they still take the time to get where they want to be.

Reference wise I could now give you a couple of names of the usual suspects in this genre. I won’t though. A suprising (to me at least) element are the mono-influences I hear in the slower parts. It works out really well for them.

The vocals are a matter of taste here. I do like it when I can understand the lyrics. That isn’t the case here. That doesn’t stop me from screaming along at some points. Even though I have no clue what I’m singing…

If you can get past this and you’re into post-metal you’ll find one of the gems in the genre here.