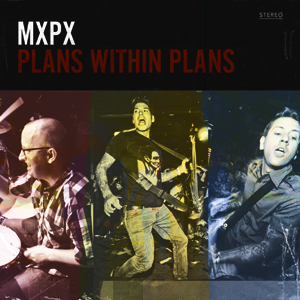 MXPX, isn’t that the Christian pop punk band on Tooth and Nail? That pretty much sums up all I knew about MXPX before this record dropped in my mailbox. MXPX (or Magnified Plaid as that was the original name of the band) started out in 1992 and Plans Within Plans is there ninth studio record. As for the whole Christianity thing, I can’t say there’s much of that on this record. There’s no big picture of Jesus, gospel choir or praising the lord, fortunately.

I don’t know what the band was thinking when they recorded ‘Aces Up’ and even used it as the first song of the record, but they almost had me turning the damn thing off. Don’t get me wrong ‘Aces Up’ is a good straight up pop punk song… until there’s an electronic drum part which makes it sound like something Good Charlotte would have come up with. (1.39 minutes in the song)

If you get past that part there’s enough on Plans Within Plans to enjoy. ‘Stay On Your Feet’ for example sounds like Sony-era Bad Religion and ‘Inside Out’ reminds me a lot of the good old days of No Use For A Name.

MXPX aren’t angry anarcho punks, they’re the kind of tattooed and pierced guys who are so friendly they even are pals with the mayor of their hometown and at one time received the key to the city. (You see I did my research here). The band started when all members were 15 and besides frontman Mike Herrera the other two members don’t do much touring. It says something about the band members and their way of thinking that Herrera nevertheless still writes and records with his longtime companions and goes on tour with hired muscle.

I have to say I was so pleasantly surprised by how much I liked this record I started checking out some of there earlier material as well. DON’T TRY THIS AT HOME. Not everything this band has released is this good. I’d suggest you avoid Before And Everything After. Their early Tooth and Nail stuff however is kind of good.

It’s not often that a band comes up with one of their better records in the year they celebrate their twentieth anniversary especially within the pop punk scene. That MXPX is able to pull that off says a lot about their musicianship and down to earth approach.