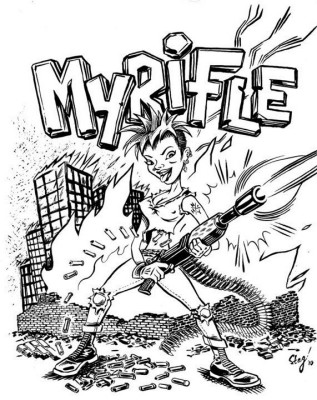 My Rifle is a fairly new band, but is made up of 4 ‘oldtimers’. The members of this band have played in a number of well-known New York hardcore bands including Life’s Blood, Supertouch, Absolution, Our Gang, Altercation, and probably more I forgot. So it’s no surprise when Freddy Alva resurrected Wardance Records that he not only did an amazing re-release of the legendary ‘New Breed’ tape compilation, but he also released My Rifle’s self-titled 4-song 7″. With a heritage like this band has, expectations run high. I know mine were when I first heard about this band.

My Rifle did not simply relive the past and create the same music they did before. Musically My Rifle plays mid- to uptempo hardcore/punk with a bit of a crossover edge, without sounding like their old NYHC bands. This 7″ was recorded at drummer Andy Guida’s own Six III studio and he gave this 7″ a great and clear sound, especially the bass-guitar has a great sound. It might not sound ‘dirty’ or ‘DIY’ enough for some hardcore purists, but whatever, I think this 7″ has a great sound. Also, Jason’s voice is quite different from his days in Life’s Blood, as can be expected 20+ years after the demise of LB. His vocals on here are awesome (without saying his vocals in LB were bad!), they’re probably my favorite part of My Rifle, he mixes up his vocal style throughout the 7″ without sounding strained at any point. The lyrics are definitely more cryptic than during Jason’s LB days, and seem to revolve about self-determination, hypocrisy and questioning religion/yourself. I could have done without the instrumental ‘jam’ at the end of closing track ‘Stoning The Gatekeepers’, but apart from that it’s a great 7″ that will continue to receive plenty of spins by me.

Also of note is that the artwork for this 7″ was done by none other than Sean Taggart, who has done classic designs for bands such as Agnostic Front and the Crumbsuckers. The digital download version of this 7″ comes with additional sketches done by Sean Taggart, if that is your thing.