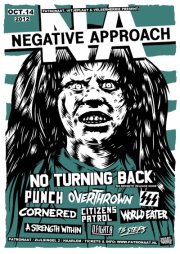 I missed a great deal of the first bands and only caught the “headliners”, sorry for not reviewing everything.

For starters I would like to compliment the Patronaat crew for fusing the Negative Approach and No Turning Back shows and coming up with the idea of putting a second, smaller “Uit Je Plaat” stage in the venue, it looked really cool. Now, for the bands:

Punch
I just got there when Punch finished their set. Really loud, really fast, really angry. I can’t really say much else about it, sorry about that.

No Turning Back
Brabant, The Netherlands’ No Turning Back were playing the show to present their newest album, No Regrets. NTB has toured the entire world in the past few years and that touring routine turned them into a tight and relentless show-machine. The Europe Hardcore flagship bashed through their short set without any difficulty. They put on a good and fun show but didn’t receive the crowd reaction they had (probably) expected. I must say that I found it a bit strange that they did not play that many songs, maybe 2 or 3, off No Regrets, I would’ve expected some more from a record release show. It was a fun show nonetheless. NTB ended with a short speech, telling the crowd that Negative Approach was a major influence on their band and that everyone was supposed to “stomp” each other during Ready To Fight. Negative Approach was up next.

Negative Approach
In regard to the finishing speech of No Turning Back: “Can’t Tell No One, What to do.” There was no moshing to be seen during the 35 minute set of NA. Well, if you’ll count some wacky drunk smashing a beer bottle in the pit moshing, then there was some. Negative Approach played a set filled with classics like Nothing, Tied Down and Why Be Something That You’re Not, songs that everyone wants to hear. Sadly the set seemed really forced and weak to me. It just seems strange to watch some dudes that could all be my dad drunkenly perform some songs they wrote almost 30 years ago. Sure, they played all right but it just didn’t feel like a sincere and energetic set. You can write it off on the enormous main stage or on Brannon’s tipsy stage banter (“Yo, check it out..”) but the performance still lacks energy. I think NA should take it easy on touring Europe, for people don’t really want to see a reunion band so many times, this results in half-empty venues, and to play in smaller places, this could improve the crowd reaction or the vibe. Just a thought.

Cornered
Friesland’s hardest band, Cornered took the stage as the closing band. Vocalist/stand-up-comedian/entertainer Niels opened with an explanation why Negative Approach’s performance “sucked” (“Je werkstuk van de basisschool is een paar jaar later toch.. eh… ook niets meer waard”) and thanked the “5.5%” for sticking around. Cornered played an extra long set filled with NYHC worship and brought the roof down. The entire set was on point, the remaining crowd was into it and energy was all around. Definitely an awesome performance. I’m also giving some bonus points for the incredible stage banter and jokes, grade A stuff. 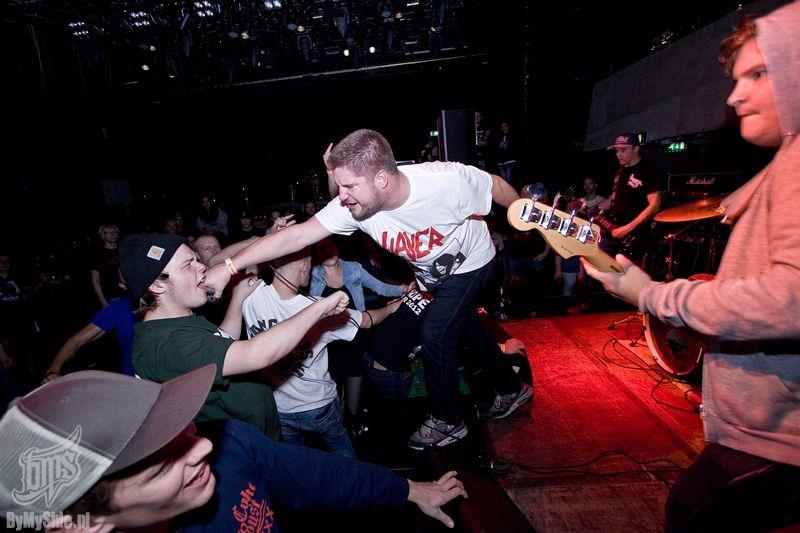 Concluding: A fun night with a let down and a surprise. A cool show night but nothing to really write home about.