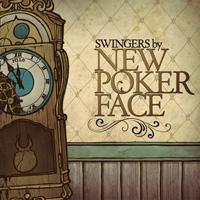 There’s no denying that while Breda is a nice place to go shopping with your mom, it’s not a city known for it’s many events. To put it more clearly: Breda is one of those places which are great to visit, but you wouldn’t want to be found dead there. And death would come out of boredom, that’s for sure.

It’s known as well that the best art is made out of urgency, frustration, necessity. Breda’s most important punkrock band New Pokerface is a prime example of this. Their new four song ep ‘Swingers’ is one of the best Dutch and even European punkrock records released this year up untill now. In fact there’s more excitement found on this ep than there is to be found on the streets of Breda in a month.

If you ever wondered what Rise Against would have sounded like if they didn’t go for the big rock sound but instead started incorporating Jimmy Eat World like influences New Pokerface is your answer.

New Pokerface is one of those bands who acknowledge that good songs deserve great artwork. State Of Affairs and Atlantis bassguru Marijn Slot (also known for his work for New Morality, The Fifth Alliance and Permanent Mark) did a great job designing something that stands out between other releases. Seeing this artwork one can still hope for his comic to ever get done.

‘Swingers’ shows New Pokerface ready to take over the hearts and minds of anyone who grew up on Epitaph and Fat Wreck records but gradually started moving their heads to Jimmy Eat World as well.