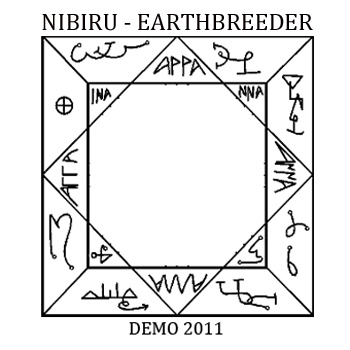 Sometimes you hear a demo you instantly fall in love with. It doesn’t  happen too often, but Nibiru certainly got my attention with this demo. I mean they mix my two favorite ‘genres’ (NYHC and grunge) and they do it well.

There’s two songs on this demo. Both clock in over 6 minutes. So all you ‘it-has-to-be-faster-than-the-speed-of-light-enthusiasts’  can probably safely click away now. To everyone else: No worries, they keep you interested enough and those 12 minutes are over before you know it. The second song, My Planet, is good, but a bit standard. I mean, it’s just as good or better than most NYHC sounding bands out there and you’ll be banging your head no doubt, but…

The real beauty is in the first song, Earthbreeder. At first I didn’t know what to expect. After that Lockin’ Out styled intro (You know, “Yo, listen up…”) breaks down, they break right into the groove with a heavy opening riff  and once the singer starts to do his thing you know you’re dealing with the good kind of NYHC, but when they reach the chorus… Damn. A big catchy rock chorus, with GREAT vocals. It’s what sets them apart from other bands in the genre. It makes them stand out. And I would love to hear more like that.

It’s a good thing the year isn’t over yet, because Nibiru ended up putting out the best demo of 2011 and totally deserve a spot on my yearlist. Probably yours too.

Do yourself a favor and pick up that demo.

We already had a short chat with them, so I suggest you check out the short introduction with Nibiru we did on here too.