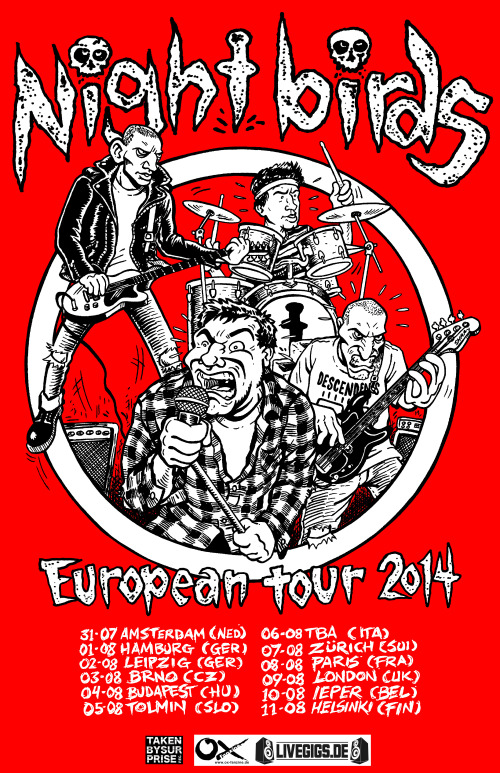 Holy shit that was an experience of a lifetime. A roller coaster ride to the max. One of those moments that life flashes you by. I’m not talking about Nightbirds here but about the crazy ride from Tilburg to Amsterdam to get in time for one of those shows that had the potential to be on my end of the year list. It would’t be the first time Nightbirds appeared on that list. There sophomore full length Born To Die In Suburbia already featured on the 2013 version being one of the best records of last year.

After a crazy way too fast ride we drove into the centre of Amsterdam. Immediately I was confronted with everything I hate about the nation’s capital. Way too many tourists looking for drinks, (soft) drugs and what they might think is a good time (getting pick pocketed, hung over and fucked over by a Eastern European girl who’s forced to work as a prostitute apparently makes up for the world wide known Amsterdam Experience), trams and people on bikes who think they own the place.

We managed to park the car and walked to the Winston venue. I’m not going to talk about the first band of the evening since I’d like to not confront myself with ever having seen such a lousy band in 2014. Sunpower played as well, but I’ve seen them many times and I was more curious about hearing Chain Of Strength stories by their Dutch crew member.

Now as for Nightbirds. I guess the red light district is one of those places where a band like Nightbirds fits as the glass shoe does on Cinderella. With their hybrid sound of fast punk and surf music and their lyrics full of suburban angst and 50’s horror imagery Nightbirds provide the soundtrack for a night of binge drinking and debauchery. And boy did they deliver. They played tight, without too many pauses in their set and with some members appearing to be on some self destructive drugs making them look like the plain look weirdos who turn out to be serial killers in your favorite c-movie. No stage banter expect for we’re Nightbirds from New Jersey, no encores. Just a solid set of their best material.

I hardly ever make the effort of visiting Amsterdam for shows but this one was worth the effort. You all missed out on one of the better live sets this year, Nightbirds will be on my end of the year list once again.