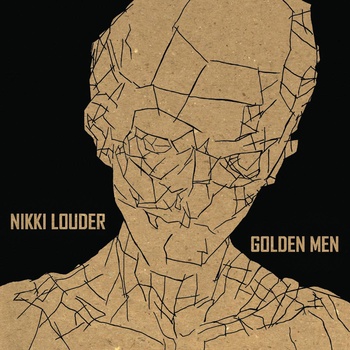 I like Nikki Louder, I liked their noiserock from the moment my record player started spinning this Golden Men record. This is the third album by the Slovenian noise rockers. It was mastered by Carl Saff and the artwork, which is pretty cool, was done by Lucijan Prelog from the band It’s Everyone Else.

So these guys are more than just noise, there’s a complex noisy, mathy sound going on here, that immediately invites comparison to Sonic Youth or more recently Pissed Jeans. There’s also a bit of industrial and hardcore influences mixed in there, so throw in some Don Cabbalero, The Jesus Lizard, Pailhead and Big Black. But despite influences, this band just sounds great.

A jagged, driven layer of guitar work rampages forward on ‘Golden Men’, shouted vocals break this up for moments, before the sound thunders on relentlessly. Then the music soars up into space suddenly, suddenly intensifying. On some songs the band takes a mellower sound, like ‘Barefeet’ and ‘Bridge To Infinity’, which seem more atmospheric and soundscaping.

The song ‘Mouse Dress/Hey Joe’ seems to draw inspiration from the krautrock movement in its spacy sounds. Weeping and whooping through the pounding beats, with militant exclamations shouted through the music. ‘Indian Companion’ is also an intense sounding song, gritty and dissonant with a dark feeling to it. The band actually manages to sound like a weird blend of Purling Hiss and Botch at times. Hectic riffing forms the prelude to another outburst of shouts on ‘Bro Way’, there’s a lot going on in a lot of layers of sound in these songs from a gentle thudding bass to a frantic tapping on the drums.

Some sonic extravagance is displayed on ‘Leaking’, which is mainly distorted, squeaking guitars over the steady backbone of a rhythm section. ‘One Day Friends’ closes the album in a chaotic, noisy manner. Pretty much how it started. I can only repeat that I think this record is great. I love Nikki Louder.