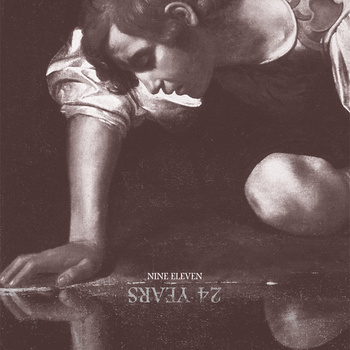 Nine Eleven returns with ’24 Years’, a 6-song album they released on their own label, Nine Eleven Conspiracy. I was pleasantly surprised, even impressed, when I heard this record. The songs are complex and hard-hitting with some great riffs, interesting song structures and good build-ups. The opening duo of ‘Fleeing From God…’ and ‘…Defying The Sea’ are my favorite tracks here, really good stuff. The band takes influences from the 90’s such as the first wave of screamo and some bands from the Ebullition Records roster, and combines it with a much more modern sound and approach.

Lyrically the songs tell a story again, although more loosely than with their previous record, the ‘Le Rêve De Cassandre‘ album. The lyrics here are more inspired by, than following, the story of Goethe’s ‘Faust’, which is about a man who sells his soul to the devil. But the lyrics also have a very personal edge to them, making them more interesting to me. Either way, the band continues to write lyrics that are unique and off the beaten path.

The artwork is also interesting, esp on the (limited edition silkscreened) CD. On the CD, the image of blues legend Robert Johnson is used, and some text lifted from wikipedia to explain his connection to ‘Faust’, with the legend that the devil tuned Johnson’s guitar and thus enabled him to create the blues music he became so famous for. The LP’s artwork is made up of old paintings, unfortunately I don’t know who made them or if they’re connected to the story of ‘Faust’, but they look great as well. One thing this band could never be accused of, is not caring about their artwork.

Previously I could enjoy Nine Eleven only in small doses, and their material was kinda hit or miss to me. With ’24 Years’ they’ve delivered a record which is much more coherent and of a consistent level. I hope they continue this way.