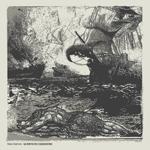 Nine Eleven from France are back with a concept-album, their 3rd one for I For Us Records. This album, ‘Le Rêve de Cassandre’, or ‘Cassandra’s dream’ in English, contains 10 songs. It starts off with a jangly acoustic intro and then switches to up-tempo modern-sounding hardcore which brings to mind bands such as Bane, Another Breath Every Time I Die, and Refused. It is interesting at times, but it unfortunately also means in this case that some of the songs have parts which don’t work together too well. The mix of styles becomes a bit too much of a hodge-podge for me as the album progresses, it works better for me when listening to this a few songs at a time.As already mentioned this is a concept album. It is centered around an Afghan refugee who fled his country because of the Taliban. He is on a boat of refugees drifting aimlessly in the Indian Ocean who shares his dreams & visions, as they eventually get rescued and end up in a struggle that’s not theirs. The lyrics are accompanied by additional paragraphs in the insert, tying the texts together. All of these texts are printed in both English and French, which is a nice touch. The lyrics are what makes this album stand out really.All in all, the album has its moments, has interesting lyrics and is definitely an improvement over the only other Nine Eleven material I am familiar with (their ‘Use Your Disillusion’ album). This might be an album that has to grow on me, but for now it falls short of keeping my attention from start to finish. Closing track ‘Maison Dieu’ does show though that this band has a lot of potential waiting to come out.

Label: I For Us Records