Nirvana – Live at the Paramount DVD 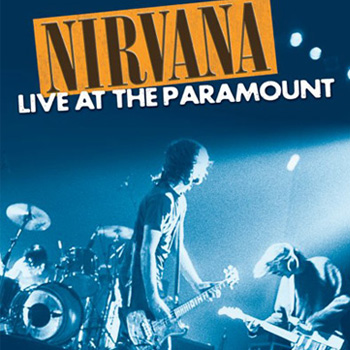 Just a short disclaimer, to make it perfectly clear: Nirvana is my favorite band since I was 9 and that will never change. They were harder, more punk and more real than a lot of so called hardcore bands out there.

If anyone of you ever saw the Lithium, You Know You’re Right music videos or the Live! Tonight! Sold Out! video compilation, you did see parts of this concert already. If you were a bit more of a collector (like me), you might even have heard the concert already since there’s a pretty good soundboard recording available on bootlegs. But the biggest portion of the video wasn’t available before. What we did get to see from it already looked & sounded amazing though. It’s the only Nirvana show ever to be filmed (on proper 16mm film that is) which in result means it’s the only Nirvana material that’s available in Hi-definition. To sum it up, let’s just say I was pretty excited to finally get to see this footage in full.

So when I got this promo in the mail, I totally dropped everything else I was doing, went straight to the DVD player, put it in and pressed play. When you start the concert there are two options: Full 16mm film frame (1.37:1), which I guess is the original format and means you’ll get black bars on the side on a widescreen TV, but the best definition. Or you’ll go for the Anamorphic Widescreen (16:9) which is optimized for, you guessed it, widescreens and seems to look a bit more grainy. Both look great to me though and I’m not technical savvy enough in that department to give any additional info about it. But trust me, the minute you see the show you’ll forget about that stuff anyway.

The show starts with some footage outside the venue. The typical sign on the outside announcing the show, people in line, trying to get inside the sold out venue. You know, the stuff you usually see when you go to a show. Gets you into the mood right away. The band starts the show with Jesus Doesn’t Want Me For A Sunbeam, a cover of a Vaselines song, announcing them as “very punkrock”. Keep in mind, this is years before their MTV Unplugged rendition. Pretty bold choice, but it works great. After that they launch straight into Aneurysm to be followed with Drain You. Maybe my two favorite Nirvana songs. The rest of the setlist is a nice mix of Bleach & Nevermind songs with the already mentioned opening cover and Sliver and Been A Son being the outtakes (both to be found on Incesticide). After they end the show with Blew they come back for an encore, starting with Rape Me. Kurt introduces the song as followed “This song is about hairy, sweaty, macho, redneck men… Who rape…” (as the crowd cheers you see Kurt thinking “what the fuck?”). Remember folks, this is Halloween 1991. In Utero was still far away, so this early version doesn’t have the “my favorite inside source” bridge, but in return you do get a frenzy solo. They end the show in style, “Since it’s Halloween, we thought we would play the secret song”, playing a frenzy version of Endless, Nameless (The song that you’ll be hearing if you wait for 12 minutes after listening to Something On The Way on Nevermind). Of course this results in a free for all destruction at the end. It’s Nirvana, what did you expect?

As with most shows Kurt doesn’t say much, but Krist is pretty talkative (“You know who I came as? John Jacobs. Cause I John Jacobs will bust 100 bass guitars over my… knee. You don’t like John Jacobs? He rips up phone books for god”, as could have been heard on the From The Muddy Banks Of The Whiskah vinyl). I have to mention the go go dancers on both sides of the stage too. A boy and a girl in white shirts (with “BOY” written on the girl’s shirt and vice versa), dancing their hearts out pretty much the entire show.

With the closing shots of the audience and the credits rolling by I realized I turned pretty silent. Show’s over. I’ve seen it. Finally. Even with all the expectations I had, it impressed the hell out of me. I mean, I loved the Reading ’92 and MTV Unplugged DVD’s, but this probably comes the closest to a regular Nirvana show. Or probably even better because of the way it’s filmed and sounds. A classic without a doubt and I have no idea why they waited so long to release this. But I’m glad they did. You could argue that the Nirvana management made some strange choices in the past and they might be doing that again with the upcoming Nevermind reissue (we’re celebrating 20  years of Nevermind this year), but this release is spot on if you ask me. So if you’re into Nirvana, this is a mandatory pick up. If you’re into good music in general you should give this a chance too. This just might be the show to turn you into a believer. It’s coming out next week, so put that money aside now and keep your sneakers at hand so you can run to the store once it’s out.

“Thank you very much… So 2 percent of you are in costumes, personally I think that’ s very lame. Unless you are all supposed to be punkrockers…”

Oh there’s also a Blu-Ray version available, that should look even better. In the meanwhile this will do, and then some…

POSSIBLE SPOILER ALERT
Don’t read any further if you would like to find the easter eggs yourself. But I wanted to be as complete as possible: To illustrate that they really did their best with this release, there are two easter eggs videos on the disc. (Amateur) Video recordings (with minor cuts) of Territorial Pissings & Breed filmed from the stage at the Commodore Ballroom show  in Canada on the 8th of March 1991. The first video material we’re seeing of that show, since an audience audio recording was the only thing circulating in trading circles. The footage gives a nice contrast with the Paramount footage as well.