No Guts No Glory – Yes, We Have Partying Skills 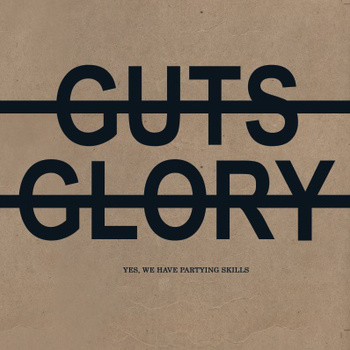 They are French and they play what sounds like fun punk rock. They’re also vegan, if anyone finds this very important. At least they want vegan food on tour. They also have partying skills, at least that’s what they try to convey on their latest record Yes, We Have Partying Skills. No Guts No Glory definitely sound like an old school punk rock party.

They call themselves one of the oldest hardcore bands from France and used to sound a bit more like Madball. No more though, this is more like The Lawrence Arms, Kid Dynamite, Descendents and that kind of stuff. Which is pretty cool actually since thats what everyone digs who’s over 20 and still into punk rock, right?

´King Of Hearts´ starts of this down to earth album, that came out mid 2013. It´s energetic, simple and filled with the joy these guys play with. The lyrics deal with the typical teenage angst topics, mixed up with a sense of self realization and of course rebellion. Sometimes the English is a bit lacking, but that usually just ends up making songs a bit more funny like ´Brutal Lesbienne´. A little reference to Motörhead probably on ‘King Of Spades’, which doesn’t sound anything like the song about the other card.

The vocals of Julien are not the best you’ll hear, and by that I mean by punk rock standards actually. His screamed words are always almost out of breath and hard to decipher. That wouldn’t be a ba`dd thing if there was any other vocal style to be heard. Songs like ‘Chat Noir’ and ‘You Cheater!’ lose a little bit of their conviction due to that. Something that is usually appreciated in the bands I mentioned earlier.

Nonetheless, the band offers a fun record with a high dose of energy and the necessary social criticism. Songs like ‘Great Capital, Judeo-Christian patriarchy, love letters and tea‘ have no pretense to being niceties. “Don’t blame me for trying to stay out of your system, trying to stand out of this mayhem, I’ve got no remorse. Because I know your politics will fail”. They keep sounding like they are having fun though, so should the listener.

Band: No Guts No Glory

Label: I For Us Records