No One Is Safe – Strike First – Strike Hard 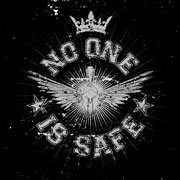 Olli, ex-guitarist of Worth the Pain from Finland has also another band since 2004 and that’s No One is Safe. Together with people from Field of Hate they only recorded a demo and released two songs on a sampler before this first album hitting the streets now.

No One Is Safe is a typical Finnish band and plays hardhitting hardcore with a metallic sound not unlike Terror or later Born From Pain. Typical are the Finnish hooks and breakdowns, bands like Worth the Pain, End Begins or Down My Throat also have. The two vocalists Jouko and Timo have different but mean vocals and are making ‘Strike First – Strike Hard’ easy to digest and not so monotone.

The powerful sound, the anger and the energy in the first three songs ‘Intro / Luulot Pois’, ‘Dead in a Second’ and ‘Family First defines this album. Hard-hitting and in your face. How hardcore should sound. In for example ‘Loyalty Takes Its Toll’ the groove stuff pops in and to be honest that’s not the best part of No One Is Safe. The guitar riff in the middle is modest to say the least.

The second half the band is going full throttle. At these moments (‘Strike First – Strike Hard’ and ‘Respect’) the band is at its best. Less metal and more hardcore is what I hear in the last part of the record. Remarkable is the Finnish rap in ‘Resist Forever’, a nice interpretation of Kickback’s song ‘Ruining the Show’. The album is released as an LP with the CD included. If you are into no-nonsense straight forward Finnish hardcore No One is Safe is worth the try.

Band: No One Is Safe