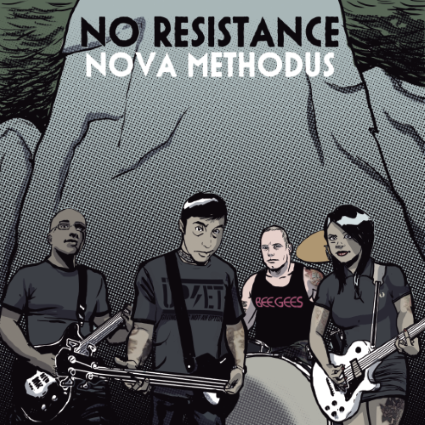 Last year I received a copy of V.I.T.R.I.O.L. and one of the quick thoughts I had was please let people be open minded enough to look past the fact that this looks and sounds like an Oi! Band. Don’t get me wrong but somehow, even in our modern times, that can be an obstacle. Just like the Dropkick Murphy’s and recently Bishop’s Green you clearly hear a band that surpasses the genre they are bound to, by wearing their influences with pride, and are destined for greatness.

Well, what makes this band great? The songs of course! They are so well crafted, catchy and energizing that this is the stuff you should hear on radios instead of the drivel you get forced down your throat. And yes, you could always put on your own stuff. But you really want your co-workers, friends or families to say for once ‘ okay, you were right, this is indeed very good music’. No Resistance picks the best of every decade of the last century and bundles it into these instant hits.

As far as V.I.T.R.I.O.L. goes it would be a 7,5 because even the charm of the great songs still was muddled a bit production wise. It sounded like a thick blanket held back the energy a bit. Still the compilation of re-recorded songs held a great promise for the future.
Enter Nova Methodus. Standards met. This is a must buy that proved me right in every way. These four songs are simply great with the production they deserve. The band sounds crisp, fresh and driven without losing the typical rawer rock and roll sound that makes it special. Especially on a song like ‘In the morning’ the No Resistance does what they do best. Making a very well crafted song that goes beyond anything you expected from the band. Four very charming songs to living up every party!