No Turning Back – No Regrets 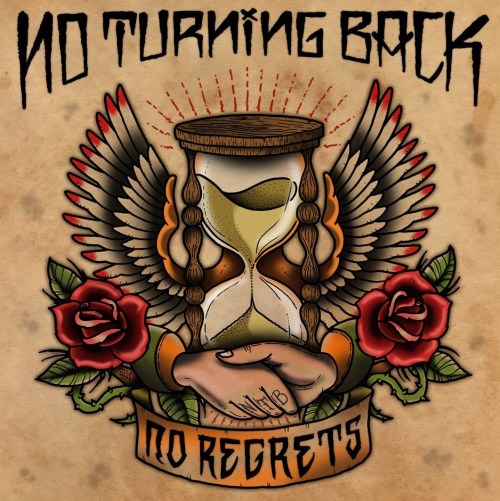 15 years of being a band sure hasn’t slowed down No Turning Back. About a year after the release of Take Control the band is back with a new record. And things have changed in the past year. The guys from Brabant added an extra guitarist in Michiel (ex-Noyalty) and have a new dummer in Nik. Don’t fear a whole new sound though. No Turning Back still brings hardcore the way it was played during the golden years of the New York scene.

No Regrets starts off with the midtempo ‘Stand And Fight’ a song with great backing vocals and a guitarsolo followed by a breakdown not often heard on No Turning Back records in the past. ‘Your Downfall’ speeds things up a bit and features some pretty original drum parts in the middle of the song. ‘Never Understand’ features guest vocals by Ricardo of For The Glory. His voice works really well combined with that of Martijn. The second to last song on this record features guest vocals by Gergor of Risk It!.

Instead of going into De Studio again, the band traveled to Berlin to record at Dailyhero Recordings. I admit I wasn’t that impressed with the sound of the promo on YouTube but No Regrets sounds pretty damn solid on my stereo.

Like other bands that have been around for a while, what one considers to be their best material is mostly up to when one found out about the band. Take Madball or Sick Of It All for example. Lots of people of my generation would say that Set It Off and Scratch The Surface are the go to records whereas younger people will probably choose for late records I don’t even own.  This is the seventh full length of No Turning Back and though it is far removed from their more ‘beatdownish’ earlier material it isn’t any less good than say Holding On or Stronger.

The new members clearly reignited the spark of hardcore within the band, and with tours all over the world coming up there’s no stopping this band anytime soon.