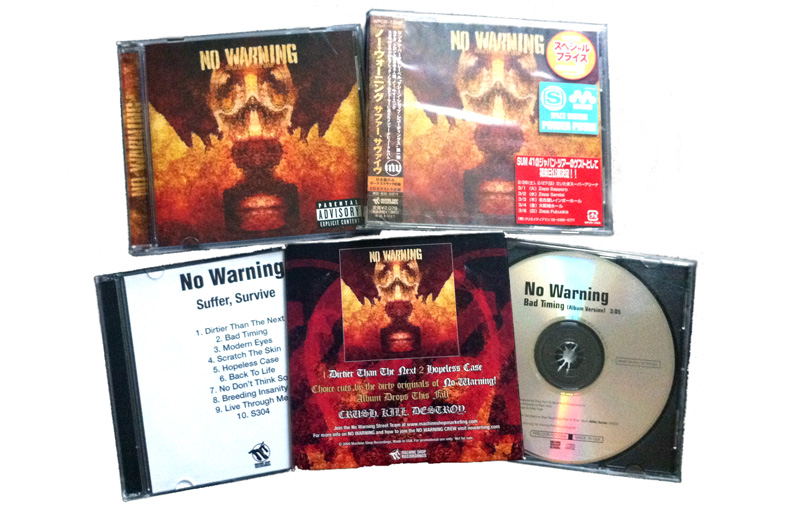 People asked us to review some classic records and we aim to please haha. So here you go. And what better way to start this off with than with No Warning’s – Suffer, Survive. Opinions on this record have been all over the place since day one. Strong opinions. Some people loved it, other thought it was terrible nu-metal. So let’s see how people think about it now.

Pim I remember there was lots of negativity when the first songs came online. It wasn’t No Warning anymore, people were calling it a bad copy of Linkin Park and stuff like that. But my first reaction was that I had to admit I didn’t think it was all that bad to be honest. I wasn’t blown away, but I found it nowhere as bad people said it was. How was that for you guys?

Nab I thought the record wasn’t good when I heard it, the nu-metal vibe definitely put me off. I seriously committed to listening to this record again for this review and I have to admit it’s not as bad as I thought… but still pretty bad. I don’t really care for this record, but it’s funny to see how people have such strong opinions about it.

Rold I have to admit I thought No Warning was a band that didn’t deserve the hype even before Suffer, Survive came out. Bridge 9 was one of the better labels around and all their releases seemed flawless to me untill Ill Blood came out. Everyone was raving on this band and all I heard was boring New York Hardcore. So I never checked out Suffer, Survive and didn’t really pay attention to the way it was received.

Callum Being the young guy in this discussion by the looks of things, I was literally just starting to get into hardcore at the time when this album came out. I picked up on No Warning after a while, but a lot of the older people I hung around with at the time were outspoken on how crappy Suffer, Survive was, and I just… never ended up listening to it. Until now! Mid-way through my first listen… I gotta say, what is this shit? The self titled and Ill Blood are great, but this I can’t take. Is this what happens when you go on tour with Linkin Park?

Is this what happens when you go on tour with Linkin Park?

Pim It’s what happens if you just do whatever the fuck you want to do. And maybe also what happens when you get signed by the label run by Linkin Park and record with the producer that also did Sum 41… Either way, the more I listened to it, the more the record grew on me. I’m a sucker for melody, for catchy stuff. And well, you can think about Suffer, Survive whatever you want, but you gotta admit it’s pretty damn catchy.

Nab I will admit that some choruses are pretty damn catchy, and I find myself humming the single, “Bad Timing” after listening to it. But on the whole I think it shows that they are “trying too hard” sometimes. In the end it just sounds like hardcore kids trying to do what was popular at the time (Limp Bizkit, Linkin Park, Papa Roach…); I mean, there are still some legit mosh parts on here. 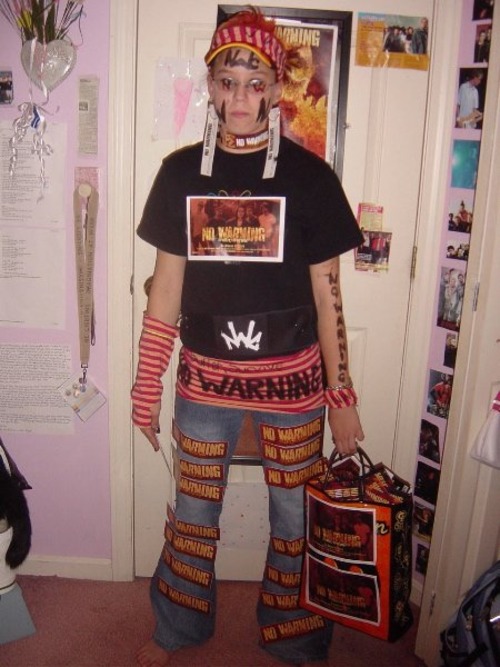 Callum I don’t really know what to make of this. There’s some cool riffs to headbang too, and even a few of the choruses are damn catchy, but I can’t get beyond what the band used to sound like. Narrow minded maybe, but it just smells like selling out a bit to me… I think if I’d been a fan of No Warning since the first record, I’d feel very disappointed by this.

Pim Bands can change you know…

Rold I expected to hear stuff in the vein of Crazy Town (wasn’t one of those guys previously in a straight edge hardcore band?). So putting it in that perspective Suffer, Survive isn’t as bad as I expected. However it is Linkin Park with some hardcore parts. Catchy yes, but not a record I would play a lot of times. It’s way overproduced if one asks me.

Pim Something else, do you guys remember that streetteam stuff? That girl plastered with No Warning stickers? I have no idea what was up with that exactly, but we need to get that picture in this review haha.

Nab Hormones will do that to you. I’m sure someone on the b9 board can track her down.

Callum You’re probably right you know… I might set them that task, haha.

It’s a classic for me. And in time it grew to be my ‘go to’ No Warning record.

Nab Wow! I guess I shouldn’t be so ashamed of my Dashboard Confessional CD collection after all…

Pim That’s what you get when there’s no vinyl release… No shame at all haha.

Callum I once saw a stall at a flea market (I wish I could say it was Rick Ta Life’s) that sold mostly late 90’s worthless electrical goods, and found this CD in with a lot of crap nu-metal CD’s. I was kinda stoked for a few seconds, but I didn’t buy it…

Pim Haha I actually prefer both Suffer, Survive and the s/t EP (My World!) over “Ill Blood”.

Callum You’re crazy Pim, haha. If some other band had put this out, it’d have been another in a big list of nu-metal records I never listened to, but as it I don’t like it. 35/100 at best.

Rold I give it a 50 as well. Just for the effort this band has put in sounding like Linkin Park. It’s crazy to hear this record and think about what key members of No Warning went on to do like being Jordan Posner becoming one of the masterminds behind the best Terror record to date (Keepers Of The Faith) and frontman Ben Cook who’s more recent career in Fucked Up and Young Governor is much more to my liking. By the way Zach Attack of Knockdown and Violent Minds fame did end up in No Warning as well if I’m right.

So what do you, reading this, think about the record? Any suggestions we should look at next?