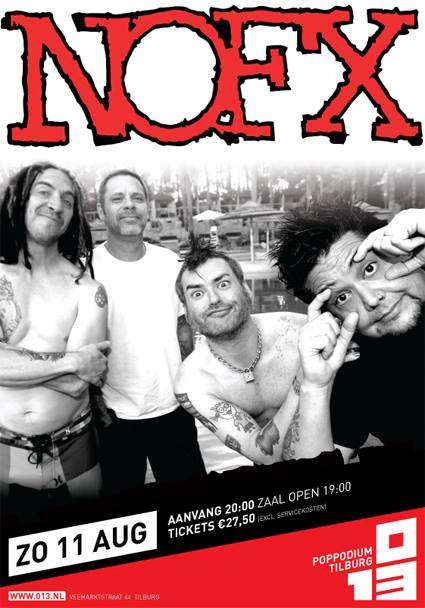 When the opportunity arose to check out NoFX at the 013 I thought it was a good idea to call in the help of our punkrock connoisseur/bassplayer Emiel for this SWNK review. I mean, I heard a couple of NoFX songs here and there that I love, but he knows them all. By heart. So after he finished playing a Ted Nugent coverset (!?) at a local fest we jumped in the car and headed straight to the 013. When we got out of the car we could hear Antillectual already started, so we missed out on the first band.

Pim It’s been a while since I’ve been to the 013 (Leeway in 2006 comes to mind, but that can’t be the last time I was there right?), but it’s still a great venue. Good to see the place packed, especially since with 30 euro’s it wasn’t exactly a cheap punk night out. But people were having a good time for sure. When was the last time you were there Emiel?

Pim So that’s some time ago for you as well… Oh well, what about the show itself? Antillectual were the first band we’ve seen. I Thought it was cool they handled the big stage really well. Some bands seem out of place at a stage like that, but Antillectual seemed right at home. The drum sound was massive! Guitar could have been a bit up in the mix though. Talked to some people after the show that weren’t that into them, saying they were “too serious”. That’s a thing you’re going to get when you play with a band like NoFX of course. But I liked it. How about you?

Emiel I like Antillectual a lot, maybe the NoFX crowd expected some snotty fun punk band. But I think Antillectual deserves this kind of gigs, so they can share their views with more people! The front of house sound was pretty thin, except for the drums. No definition in the overall sound. But they played super tight!

Pim Yeah, it’s cool for them to do these ‘big’ shows. Well deserved too. Them being a hard working band and all. “Antillectual still lives!”

Anyway, let’s talk NoFX. I’ve never seen them live before, but I loved it. Most bands want to start playing right away when they get on stage, but I found it funny NoFX just walked onstage and started making jokes, interacting with the audience before they played a song. They might be middle aged men behaving little little childs, but they played pretty tight. Never knew the guitarplayer was a great singer (and trumpet player!) either by the way. Dude got a great voice.

Emiel I forgot how many times I saw them live, but they never disappoint, because it’s always the same! They played pretty tight, and I love the Rancid cover (Radio). It’s great to see they’re still having loads of fun during the set.

Pim Dudes are just having fun. Funny to see them taking the piss out of their audience as well. So hmm, when you compare this show to others. Was it good, bad, average?

Pim I guess you’re doing well as a band if even an average show is good! I’m still not a fan of ska though. And they do have ska in their songs, no matter what you say.