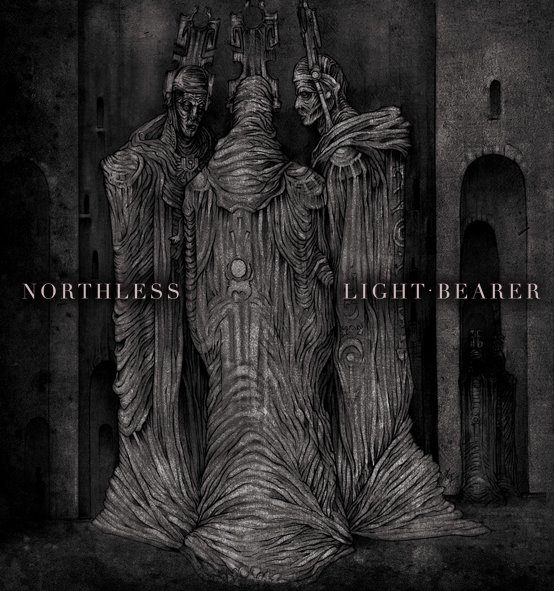 Vocalist Alex CFs previous band Fall of Efrafa were already masters in creating massive concept albums, with Light Bearer they continue on that path. They offer us a 22 minute song entitled “Celestium Apocrypha; Book Of Watchers’ that is taken from the Book of Enoch, a non-canonical chapter of the original Jewish scriptures. It is a play on what was deemed necessary to appear in the final canon. The content is a metaphorical story about the dawn of enlightenment, based upon a number of interpretations of the Judaea Christian version of the casting out of Lucifer and the fall of man from the book of Genesis. The story is an intrinsic part of the mythological narrative of humanity, the subjective concept of good and evil.

Before we flip over to the B-side of the 12 inch there is Northless from the USA and they spit out two songs of doomy hardcore and sludge with pissed-off vocals. Those are really a matter of taste; they are similar to the vocals unleashed by Weekend Nachos’ frontman John Hoffman. After a while I could crack his voice, guitarists Erik Steingleins voice doesn’t do it for me, no matter how hard I try.

Maybe it’s the combination with the slow and down-tuned sludge the problem, I don’t know. When you separate both parts and concentrates on the music there is sludge with a lot of rhythm changes. The two songs “Tears from Crime” and “For As Long As You Shall Walk the Earth, Your Blood Will Reek of Failure” burst out of anger and frustration while a constant melody line connects the dissonant parts of the songs. Northless music is hard to digest and only for the diehards.

Light bearers side is easier to digest. Their epos starts more ambient like and slowly evolve into very epic post metal songs with the typical screaming vocals. Alex CFs voice is a as a light buoy for the seaman, you’ll know what you get. His screams are as intense as always and his fellow men present atmospheric metal that’s on the same level as Cult of Luna.

The heavy repetitive tune after the ambient intro is calmed down into slower territories when a peaceful melody fights with heavier outbursts. The fight between good and evil if you want; first the resonance melody seems to win and this is built out in a massive climax with emotional vocals accompanied. The aggression is struggling through the notes and finally loses the game because the song ends in peaceful harmony. Light Bearer are one of this genre’s new torch bearers and if you’re able to keep the listener focused in 20+ minutes song you deserve to be!