Not Sorry – Our Choices 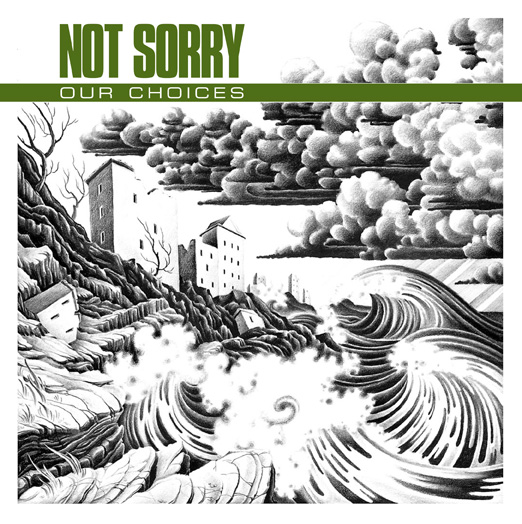 Our Choices is the second EP of Not Sorry which are a band from the Seattle area. Their debut EP Moving On already showed a passionate band, yet the songs were still mediocre and could be made by any youth crew band. Our Choices is a really good second EP because the band has found more of a sound of their own within the borders of youth crew.

From Chain Of Strength-esque bass parts to Youth Of Today-styled breakdowns it’s all here, but the bands that come to mind the most are Side By Side and Alone In The Crowd. Somehow Not Sorry manage to be one of the few bands who combine a certain amount of aggression to make more 0f an impact with their songs. It’s not that they use agression in a ‘we’re from the streets and we’ll beat you up’ kind of way. No the aggression is more like pend up anger, slowly boiling inside. It’s there, but under the surface and far more dangerous than out in the open. It’s a kinda Judge-anger, not that beatdown stuff.

The band doesn’t only go for general genre topics like backstabbing. Instead there’s a song about consumerism and greed and the band tries to break waves for a better environmental policy. A topic that’s also found on the really great cover of Our Choices. This tattooed style drawing of a tsunami is just really well done and adds extra value to the record.

For those keeping track on guestvocalists, Rory from Soul Control, Senor Bubbles from Get The Most and Chuck of Black SS participate on this record.

Where most youth crew bands tend to be just a bit too positive or cliche, Not Sorry is like the acrobat walking on a small cord high up in the circus. They really find a balance and pace that makes the five songs on this record all the more enjoyable. Last news has it that Not Sorry is gearing up for record number three and I for one expect a lot of it.