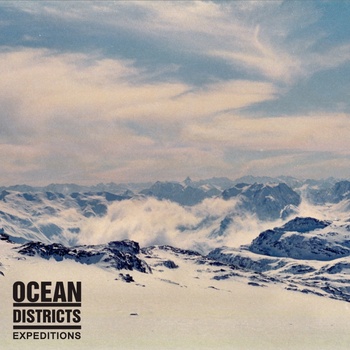 This is the sound of a bunch of guys, wanting to do something else than what they normally do in music. So Ocean Districts has plenty of experience to bring to the table and know a thing or two about atmosphere. That has culminated in the album Expeditions.

The experience has been gained in bands like Echosilence, Two Wrongs, Burn Still, Decease, STEM and Goresoerd. Plenty of bands, a lot of different styles. This time the sound turns more towards post-metal, without vocals. The Estonians sound heavy, a bit in that general direction of The Ocean, Neurosis and Red Sparowes.

From the gentle beginnings of ‘The Horizon’ a thunderous journey begins. The cover depicts icy landscapes and the wind whipping up a gale of snow and that feels like the right metaphor for the sound of this band. Heavy riffs cascade down, but then there’s the soaring guitar tremolo bits, giving it that feeling of a soundscape. ‘Arctic Circle’ widens it up even more, feeling like barren terrains, up till the horizon.

‘Expeditions’ takes the more gradual build up and holds on to that more calm tone. Adding samples to the music, gives the songs a new dimension, which is followed by a heavy tapestry of guitar work. After the intermezzo of ‘Vesels’, the song ‘Endurance’ continues that sound. The spiralling sound of ‘Aurora’ follows that, with dense, heavy breaks, pounding into oblivion.

‘Ataraxis’ offers a moment of relief, followed by the final song ‘Discovery’. This is another heavy hitter, repetitive and strong, but also gradual, taking its time. The song has some nice hooks in it, betraying the much more fierce playing these guys are used to. Considering this is the debut, it’s well worth giving it a listen.