Of Roofs, Genes and Stolen Meanings – One: Life To Learn 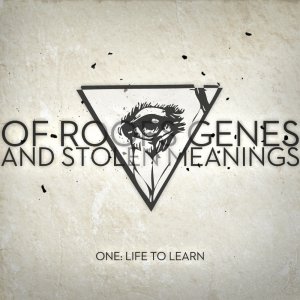 After the little review I did on Burn Still from far away Estonia, another one came in from the Baltic country. This time a band with a complex name that can be shortened to O.R.G.A.S.M., though that sounds slightly odd. Of Roofs, Genes And Stolen Meanings is an interesting band and much better than I had expected with their eclectic blend of mathcore and metalcore.

From university city Tartu in the south east of the Baltic country comes this intense band, which is part of the small metalcore/hardcore scene of Estonia with bands like We Rise Again, Who Framed Roger Moore? and aforementioned Burn Still. They sound a lot like Converge meeting Shai Hulud in a dark alley, getting into a knife fight. Add some other progressive bands that dwell somewhere between styles and you’ve got the sound that these guys produce.

The album opens with squeeking amps and distorted sounds before ‘All Gravity’ is unleashed. Intense riffin and insane breaks follow. The song moves from bursts of violence to short breaks of melodig guitarplaying, then ending up in earthshatering breakdowns again. ‘Slow Blade’ lets us hear the same sort of creative music, which also is accompanied by a video if one feels interested. It shows how the bandmembers are not only apt musicians, but also sharp dressing men.

‘A Journey’ picks up on the mad mathcore this band likes to mix in with their music, mixed with hardcore vocals and the occasional distorted grunt and guitar slide. Surprisingly the song has a poppy sound to the guitarplay, reminding you of the average poppunk band at times. Different sounding is ‘Cuntitled’, which is ofcourse a bit childish in its wordplay, but the sound is nothing childish. Doom-like opening riffs and downtuned strings give a true dark sound to this track. Only a bit under two minutes is too short for this rather brilliant part of the album.

Sheer chaotic brutality bursts out of the speakers on ‘The Customer’, which has some mad guitarplay combined with bursts of drum violence, which ‘Chokeslam’ follows up on. ‘Red Empty’ forms the hazy intro to ‘First Class’, which mixes epic melodic death metal with mathcore in a rather sophisticated way. Almost spoken word vocals over some dazzling guitar riffs, exchanged with passages that wouldn’t surprise in a Norther song. Interesting song to mention is ‘What The Ground Took’, a song that reminds one a bit of postrock the way it’s played by 65DaysOfStatic, with an ending of Touché Amore like emotion.

It’s only a brief respite from the violence that follows on ‘Life Of Getting By’, featuring brutal vocals from Erik from We Rise Again, adding some deathcore to the grooving guitarplay. I don’t know how this band did it, bu their album equally surprises you as much as it’s one coherent piece of hard rocking metalcore. They master both the power of hardcore as much as the post-metal/postrock qualities of building up atmosphere. A great record if ever I heared one from a band with the peculiar name Of Roofs, Genes and Stolen Meanings.