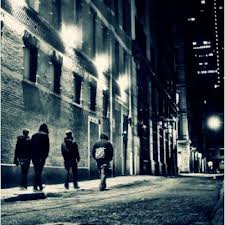 The four guys in Olde York hail from the Big Apple (the ‘true home of hardcore’ they claim, but don’t let the Boston and DC kids hear that 😉 ) and have taken it upon themselves to bring back the classic NYHC sound. I guess they’ve done a good job, because everything about Shallow World sounds like this record could have come out on In-Effect or Blackout! 25 years ago.

In 11 songs, Ted, Blake, Devon and Mike range from vintage New York groove to the more melodic part of the hood, reminding this reviewer most of Just Look Around-era Sick Of It All, Breakdown and H2O. In fact, seconds into the pounding, grooving opening riff of  Peeling Paint, I half expected to hear Lou Koller, but instead got the voice of singer Ted, who has more in common with a snarly Mike Dijan. The latter produced the album and if Battle Hymns For An Angry Planet is what you think a hardcore record should sound like, you’ll have a field day with Shallow World.

Of course, the big question with a nostalgia trip like this; Would this album have been a classic today had it been released in the late 80’s or early 90’s? The honest answer: probably not. Shallow World lacks too much memorable anthems and while tracks like The Hatred You Spread, Entropy, and One and On have me doing The Pizzamaker, The Creepy Crawly and The Lawnmower all over my furniture, other songs leave me cold, especially the Maximum Penalty-esque title track. However, if you’re in for some good old New York Hardcore without a hint of modern influences, there’s a lot of fun to be had with this record.

Olde York is coming over to Europe in January 2013 for a two week tour, so make sure your ‘Classic N.Y. Style’ moves don’t look too ‘California version’ before stepping down.

Shallow World is out now on cd through WTF Records. Poland based Spook Records will do a 3 color limited run on vinyl to coincide with the band’s European trip. Pre-orders for those slabs of plastic are up here, but you’ll have to brush up on your Polish to get them. Or ask that friendly Eastern European guy next door over to share a few cans of Schultenbräu and let him help you out. UNITY!