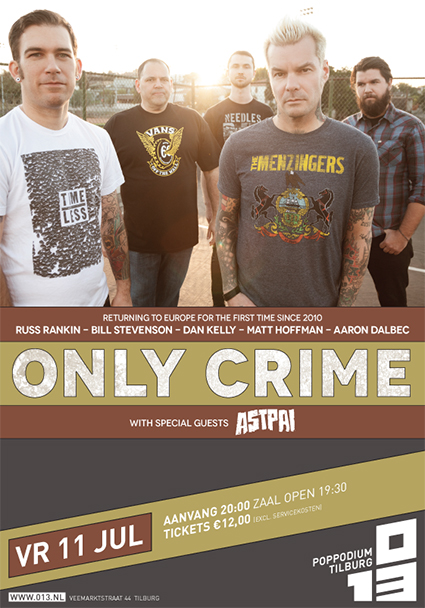 For a band often announced as a ‘hardcore super group’ Only Crime has always operated in the shadows of the other bands these guys are in. Well it’s not that surprising if your drummer is also known for one of the biggest melodic punk bands ever, your singer has a back catalogue of seven full lengths widely likened by kids from both hardcore and punk backgrounds, one of your guitar players is one of the founding members of a hardcore band that seems to go out in style and the other has inspired a whole new generation of kids to write music and escape from small-town, USA.

But let’s not focus on their lives in Descendents, Good Riddance, Bane and Modern Life Is War but shed that light on the five piece that is Only Crime.

At first glance I kind of anticipated one of those Tilburg shows with only 20 people attending, but when Austria’s Astpai started playing more and more people came in. They saw four guys pouring their heart out on tunes from their Shield Recordings released Crohnicles as well as their latest full length Effort and Means. Though I appreciated the hard work of Astpai, I admit they kind of lost my attention half way during the set. Maybe it’s because I’m only familiar with Crohnicles or the fact that because of the sound most songs seemed to blend into each other.

According to Only Crime singer Russ Rankin it’s been five years since the band last came over to Europe, as support of No Use For A Name. Was that really such a long time ago? I do remember seeing them on that tour. I wasn’t impressed by their performance back then as there didn’t seem to be any chemistry between the band members, if I remember correctly Bill Stevenson wasn’t on that tour as well. 013 did get the original Only Crime line up and if nothing else just watching Stevenson bang on his drums is better than 80 percent of your average punk bands live. But hey all members seemed to really be into it this time around. Especially when they played songs off the new record. Finally Only Crime has become a real band instead of the project of five musicians. There was chemistry on stage, Russ Rankin with his still great voice, Aaron Dalbec trashing and screaming like he also does with Bane, Matt Hoffman with his riffs, and Doni Blair and Stevenson making sure everything sounds tight as hell.

With Bane breaking up eventually and Modern Life Is War, Good Riddance and Descendents  only playing shows occasionally  there’s nothing in the way of Only Crime becoming even better the coming years.