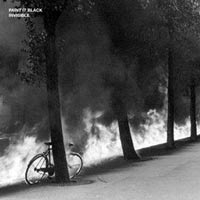 Even though this EP has been around for almost a month now, I could never accept letting this one pass you by in silence. Speaking of that, this one is everything but silent. It’s Paint It Black at their roughest. Dan Yemin sounds madder than ever.

The amazing thing about the aggressive sound in Yemin’s voice is the sincerity. It’s not an aggression he brings up because he is gonna yell in a microphone for his hardcore band. It’s his actual feelings standing tall behind his lyrics. If you listen to the sincerest parts of this EP you can actually hear his rage coming out and building up halfway through sentences (go ahead try it out: ‘Smuggled through the tunnels under Wonderland’ in ‘Greetings, Fellow Insomniacs’).

In ‘Headfirst’ and ‘Little Fists’, obviously written for Yemin’s daughter, the aggressive tone starts combining with emotion. Just the thought of people trying to force his daughter to conform to things she would not stand by, makes Dan even angrier. Resulting in almost some kind of grunting tirade at the final part of ‘Headfirst’.

But it’s not all just about emotional lyrics, there’s still hardcore. Hardcore punk in its purest form. Short, loud and tight. Melodic hooks and simple punk rock drums exchanging with bursting fills which brings the sound to the undivided fullness ‘Invisible’ carries.

A masterpiece for the hardcore fan… but a short masterpiece. That’s probably the only bad thing I can come up with. It’s time for a new full length!