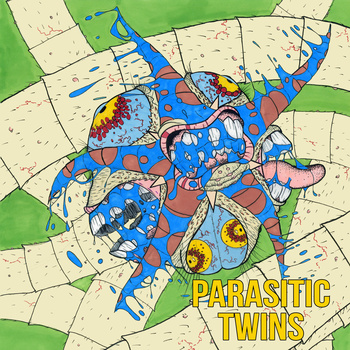 This band from Fort Wayne, Indiana delivers an EP with a very strange cover, featuring a mutated sea star and a track list that shows five titles. The band hasn’t been around long, but sound like they pretty much know what they’re doing on their self titled release.

Think high speed, melodic hardcore with an obvious portion of anger and angst. Think Negative Approach, Dead Kennedy’s and Poison Idea and you’ve got the gist of it. The lyrics on opening track ‘Parasitic Twins’ is pretty much ‘rhyme-just-to-make-everything-rhyme’ and for some reason that doesn’t work out that bad. The music feels poppy, while the vocals are hoarse, barked frustration searing into your inner ear. There’s a constant threat in the music, mainly provided by the nervous guitar parts.

Then again, a song like ‘Lily White’ won’t launch this band to uncanny hights. Lyrics like those of ‘Greedy Mitts’ don’t make much sense and seem to be born out of frustration. “From the Cradle to the grave, nature nurture, I’m a slave. Research shows where to aim, locked onto my lizard brain.” If you get it, feel free to let us know. The fury continues on the B side with two more of those driven songs.

‘Blow Hard’ and ‘Dream Lover’, though picking up the pace a bit, both don’t offer anything earthshattering except for a bit more raw sounding music. An entertaining record, that fans of the mentioned bands might enjoy.