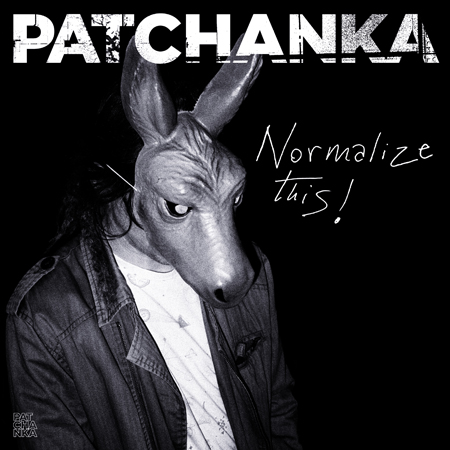 Patchanka was the name of the first Mano Negra album and the inspiration for this new band with the same name. However, these guys come from Danmark. They try to mix up some balkan, some folk and some punkrock to make a nice healthy salad of styles that sound fun. They have an album out titled Normalise This!

So that’s what can be derived from their biography. Now, don’t be to deceived by it’s label and it’s history as Drunk In Public. This band has not got that much punk elements in their sound. You can more easily compare them to the likes of Manu Chao, The Clash (Rock The Casbah style, that is) and maybe some Jonathan Richman at times. The sound is a mix of things that sounds retro, but fun. Bandmembers can’t be spotted without smiles on any of the pictures.

After a bluesy piano intro, the sound starts with some nice riffing that feels sunny and laid back, the drums have that fun vibe to it and then vocals soar over it that sound a lot like many of these light sounding bands from the eighties or, as I said, Mr. Richman. The themes are simple and the vibe airy. The clear reggae influences shine through and characterize the upbeat feeling the music has. ‘Baby Bye Bye’ is the single and it really has that poppy, funky vibe to it that is remniscent of a UB40 or even The Police. A little ska rhythm does the trick.

That kinda sets the trend for the titletrack and the song ‘Voodoo Spell’, which has a bit more dense guitarwork, switched with these hammering keys parts. A little Balkan vibe shines through on ‘Bordershop King’, which sounds more folky than Gogol Bordello ever did, thanks to the emphasis on the accordion. Without an effort the band continues to an eastern vibe on ‘Fatima’s Fight’, where the band displays a little of their political viewpoints. In fact the band donates a lot of money to charity according to their biography. ‘Doc Boots’ then sounds dark and foreboding, where the band demonstrates a different sound again.

From the start to the end Patchanka keeps surprising, and travels over the world with you, from the playful and dreamy ‘Afternoon Tea In The Sahara’ to dramatic and theatric ‘Modern World Sinner’, which closes the album with some minimal ska music and horns. Patchanka makes a charming record that should be fun for almost anyone.