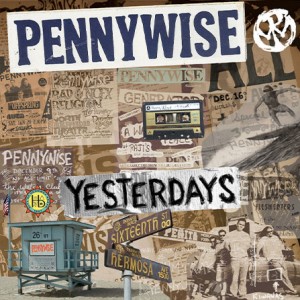 To celebrate the return of frontman Jim Lindberg Pennywise went into the studio to record some of their best material to date…. Nope that’s what you would expect.

“Yesterdays is a collection of old songs from our early years and also a few outtakes we dusted off just for the occasion,” said the band in a statement. Does that mean Yesterdays sounds out of date? Not that much. Their previous release with Zoli on vocals was more refreshing but Pennywise will always be Pennywise.

Most of the songs of this new record have been on the shelf for the past two decades. Some were even written by original bass player Jason Thirsk who committed suicide in 1996. ‘No Way Out’ was already on their 1989 ep A Word From The Wise.

It’s kind of logical to compare Yesterdays with the most early Pennywise records like Unknown Road and About Time. Though Yesterdays isn’t as good as About Time, not by a long shot, it however sounds like a familiar trip through memory lane. To driving my bike for over an hour to see Pennywise in Tilburg. To high school summers, going to the swimming pool every evening and trying to windsurf on weekends.