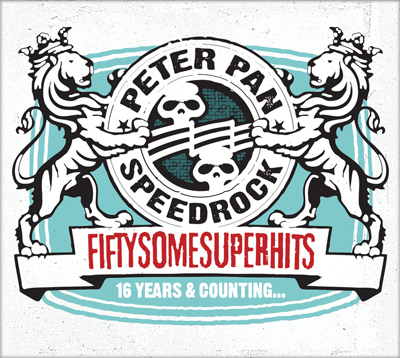 I’m not going to pretend I know the entire back catalogue of this Dutch band. Aside from a couple of songs here and there and that tour DVD they put out (loved it!), I actually know very few of their songs (by heart). I also saw them live only once (at the Restless Youth – Willem II benefit show). But even with that little knowledge of the band they did impress me, a lot. For me it’s just one of those bands I know I like, but I hardly ever put on for whatever reason (I have the same thing with Bad Religion for instance, who I love). So when the opportunity arose to check out a 2CD with all their ‘hits’ I quickly jumped on it. Perfect opportunity!

A 2CD with all their hits? That’s not hardcore? I can hear you think it. And no it isn’t, probably because Peter Pan Speedrock (as the name clearly implies) is not a hardcore band but a dirty rock & roll band. They’ve been together for 16 years and if you can stay together for that long you either deserve a statue or in this case a ‘best of’. Maybe both…

Just a short introduction: If you never heard about Peter Pan Speedrock (which means you probably don’t live in the Netherlands), you can pretty much see em as the Dutch Motörhead. That’s what they have been compared to for years and it fits. And that’s a huge compliment.

I’m not going to do a track by track review, there’s 58(!) tracks on this monster, so let’s pick some highlights:

Tracks like Resurrection, Donkey Punch, Big Toy, Bad Year For Rock N Roll, Auf Der Axe, Go Satan Go, Heatseeker, We Want Blood! and Just Another Day (I pretty much could have listed the entire tracklist) get you singing along and/or banging your head in no time. If not, it’s time to check if you still have a pulse. Just good time rock and roll.

Werelddelen features rapper Def P. from Osdorp Posse and that turns out to be a nice combination. Reminds me a lot of the ‘Briljant, Hard en Geslepen’ record Osdorp Posse did with Nembrionic. That might be my favorite OP record and this track sounds great.

There are also some covers on this beast. Who Was In My Room Last Night? (Butthole Surfers) for instance. (Ghost) Riders In The Sky is a great song, but their version sounds a bit tame, I would have love to see em ‘put the pedal to the metal’ to that song. De Schoppen-Aas is a Dutch version of Motörhead’s Ace Of Spades with Dikke Dennis on vocals. You can’t go wrong with that. I’m Not Deaf, the closing track of CD 2 is a cover of the Dutch band Heideroosjes and they managed to keep that oldschool hardcore feel of the original in tact while it has that PPS stamp all over it.

To put it short: It’s available for less than 15 euro and that’s a steal for this package. It’s either a great introduction or a nice collection. Whatever works for you. Especially if you don’t have all their stuff yet this is a mandatory buy.

Oh and kudos to whoever decided they weren’t going to remaster the hell out of this.