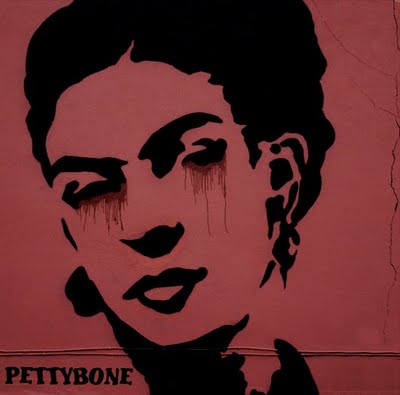 Let’s go back in time a bit. In 2010 I saw one of the first Pettybone (yes that’s a reference to Black Flag artwork artist Raymond Pettibon) shows in London when we were on a weekendtrip with Never Again. While London was a bit of a letdown itself (raining all day long), Pettybone was a highlight. Four girls walked on stage, plugged in and simply started raging. They blew me away. There was no demo to pick up (as far as I remember) but I kept in touch with them. This resulted in an interview with Lianna (the bassplayer, she used to play in Hang The Bastard too) for SWNK #2 and now this review. Pettybone just released their debut full length.

So while my mind takes me back to that show, I put on this record. Let’s see if they can blow me away again. While I’m walking through my memories of London the record starts with the song Pettybone. The opening lyrics read like a manifest. While that may sound pretentious, it isn’t. They’re making a point and it sets the mood right away. I just might like this.

I already had the feeling while I saw them live, but these recordings confirm it. The music reminds me of Nirvana (really, I’m not just trying to throw that in because I love Nirvana) now and then, being it a lot more chaotic and heavy. It’s raging but it still has loads of melody. The screaming vocals are good too. While I wish they did more like the vocals (talking / singing) in the beginning of the songs Pettybone & Le Regard (!) & No Justice Tonight, I’m not complaining. I’m just one of the few in this genre that prefer sung vocals over screaming I guess. The times they do use this different vocal approach it sounds really refreshing though, so maybe the mix is just fine as it is.

Highlights of the album? I like the fact that they not just made some good songs, but thought about it as an album. Let me try to explain that. Pettybone understands quite well that the opening and the closing song are probably the most important on an album, being the first and the last thing you hear. Aside from the opening song setting the tone right away (great lyrics) one of the other highlights was the “Blues Song (I’ve Got Nothing To Lose)” on the end. A 4 minute long instrumental blues jam with a long sampled intro. Nothing groundbreaking, but a damn fine outro. At the end you feel like you were on quite a ride. The one you want to get on again when you’re done. When you’re ready for it.

You can listen to two tracks below to get an idea. They’re coming over to Europe from the 14th of September until the 25th of September. So if you have the chance, go see em. You can pre-order the LP here and the CD can be ordered here.

Let’s hope people wake up to Pettybone, let’s hope that other world they’re talking about is possible.