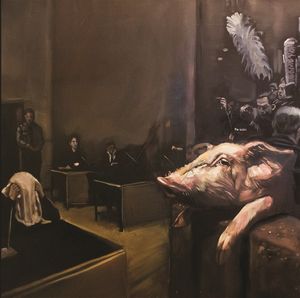 Receiving a 12 inch split album for review is not something usual nowadays. Pigeon Hunt sent us their new split with Cicutoxin. On the front cover a pig is watching us in a room of people while on the back their is even a close up of the pig. Will the artist show us how humanity behave like pigs or how pigs look at us people? The lyric sheet of Pigeon Hunt has penises incorporated while Cicutoxin used a fragment of a Hieronymous Bosch painting. Both bands wants to tell and provoke the listener however it is not yet sure what their message is.

Pigeon Hunt is still hunting you in the violent San Diego style not unlike old The Locust or Swing Kids. Singer M still don’t giving a fuck so the lyrics are full of cock sucking and getting dicks in asses. I don’t know any European band playing this style nowadays so the Fins still fill the gap with their angry & violent Screamo. Five songs in total, some straightforward like ‘XXI’, other songs like ‘XXII’ & ‘XXIII’ have the Fantomas weirdness with even a trumpet sound through it. They don’t care about normal song structures as can be seen in the last song ‘XXIV’ that is a bit slower as normal. It has the dissonance of the usual suspects such as The Locust or The Dillinger Escape Plan. I can’t get enough of this underrated hardcore style; especially when it is played vicious, provoking and with humor.

4 Doomy Sludge songs with that typical Finnish depression is what Cicutoxin is delivering. Minor downside are the vocals thart sounds a bit weak and boring. To convince as a band they should’ve been more angry or is this a downside of the recording process? The band has used the moody and painful edge of Sludge in their works. Far away in the mix a melodic guitar part is coming up in ‘Secespita’. The four songs are played with the same pace bringing you into a maelstrom of unpleasant and dizzy moments. If that is what the band wanted to achieve than they succeed however the fancy Sludge boys won’t like it.

It’s a daring concept to put two completely different bands on a split 12″ and the violent screamo punks of Pigeon Hunt win this Finnish ice-hockey battle. You can order the record via the label Ramekuukkeli.