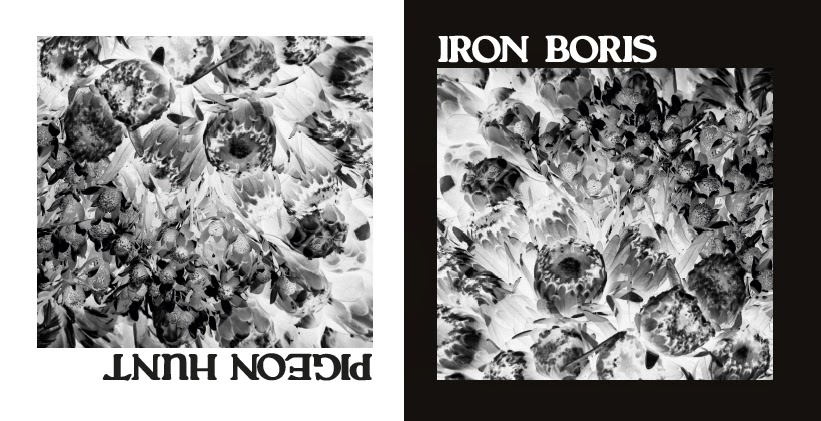 Pigeon Hunt and Iron Boris; two vicious hardcore bands from Finland who deliver outrageous hardcore. The first one is again operating in the oldschool The Locust style combined with Swing Kids parts. They despise the listener and everyone in the world with their violent and spastic hardcore. Normally I don’t quote what’s in the biography but I had to with this one:

“If the shit has no smell it loses it meaning and a big part of its identity. The purpose of smell is to disgust or to arouse you on its own fetish way. Without smell you may have a romantic candlelight dinner with shit in your pants and no one will notice it. Without smell everything is similar shit, with same formula and annoying similarity. Without smell shit is nothing.

Pigeon Hunt consists of four individuals whose purpose is to bring the smell back to shit, so that it would disgust or generate fetish arousal again.”

This is exactly the feeling I get in the five short songs. This time the frantic music with pissed-off vocals even has a trumpet player to annoy you even more. They really understand the meaning when hardcore started back in the days and that is to loathe on society and play as pissed off as possible. After a 10 inch, 7 inch and these five songs I cannot believe nobody outside Finland is talking about Pigeon Hunt because the band is really making a difference in the nineties screamo style and deserves to be heard. Totally underrated if you ask me.

Iron Boris is dissonant too and starts off in the same noisy way. In the first song there is a bit of Unbroken but later the groovy moments and sound of Entombed is all around. Just as Pigeon Hunt the screaming vocals have a lot of energy and hate in it. The music however is in a head banger rhythm (the last song has a guitar solo too) so headbanging and drinking a beer is the way to enjoy the two songs.

It’s their second output after a 7 inch that was played in the oldschool hardcore/punk style. These songs show a more metallic expression. One song is called ‘Endnote’ and people into The Hope Conspiracy will recognize this song title and I cannot deny Iron Boris is sharing the groove and vocals with this amazing band from the USA. However the band is standing a bit in the shade after the whirlwind on the other side of the wax.

This sonic assault is delivered on a 7” EP in a limited pressing of 200 copies co-released by Rämekuukkeli, Brown Records and We Are the Trail. One copy costs 6 euros (plus the postage). Order it by writing to piparnakkeli.kamakarhu@gmail.com.

Listen to some songs at:

Labels: Rämekuukkeli, Brown Records, We Are the Trail