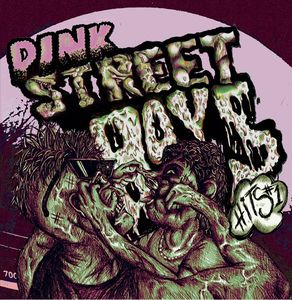 Last month I visited Iceland for one week. I really wanted to see the Aurora and to me Iceland seemed the place to go. During my stay in Reykjavik I walked past a music store called 12 Tonar. I couldn’t resist and just had to visit this place. I mean, record stores are a dying breed, aren’t they. After a chat about music the owner said I should check out Pink Street Boys’ album, and so I did. I needed the first minute of the first two songs to be convinced I needed this record. Unfortunately I missed out on a show later that week…

Hits #1 is Pink Street Boys’ first album. Based on the title I’d say they definitely don’t lack confidence. Or should I say it fits neatly with the tongue in cheek humour I get from this album. The first thing I noticed when listening to this album is the unconventional production. It sounds a bit as if it didn’t really matter how it was recorded as long it was recorded. But with a plan behind it. That doesn’t make much sense, does it? Perhaps it’ll make more sense when I say the production gives me the same feeling as the production of Satans Satyrs debut. Or some very, very old Misfits. Add to that slide guitar, loads and loads of effects on the vocals and you should get an idea. The production is kinda loud though, which makes this an intense album to listen.

Musicwise this is rather straight forward punk. In it’s straight forwardness the album is really diverse. Which is a bit of an accomplishment. At times the band sounds almost as if they play blues at punk speeds, at others it’s as if Turbonegro decided to play punk again instead of that glammy thing they’re doing now (for quite some time). The album is very coherent. The use of slide guitar and the effects on the vocals contribute to this greatly. The level of songwriting is pretty consistent throughout this album. That means there’s no real winners nor real stinkers on Hits #1. The main charm of the Pink Street Boys is the fun that radiates from the album. This is a band that’s enjoying what they’re doing. That’s pretty infectious!