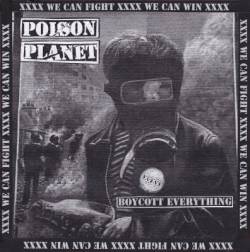 Let’s say that you’re one of the few hardcore kids who love some politics with their music. In that case Chicago’s Poison Planet is the right band for you. You also might love this band if you like your music short and fast and hate mosh parts. But if you’re looking for the next big sponsored band with colourful merch singing about dating, girls and dating girls Poison Planet is a band you’d best avoid. This Boycott Everything 7″ was released by Refuse Records in 2011 and is now being re-released as a one sided 12″ on ThirdxParty Records.

There are bands like Verse who do have something ‘political’ in their lyrics and then you have bands like Poison Planet who say it like this:

Straight Edge is not commonly perceived as being political. However, the liquor and tobacco industries are 2 of the top 3 financial supporters of Republican Candidates. If you consider yourself liberal or left leaning, let it be known that your trip to the bar or the corner store for beer and cigarettes is financially feeding the enemy. The Straight Edge lifestyle is effectively a commitment to a lifelong boycott.

This EP contains a very interesting essay wherein the band explains their philosophy behind a total boycott. This essay can also be found here.

There seems to be a whole ‘new scene’ of fast political straight edge bands coming up in recent years. Coke Bust, Stay Hungry, Vaccine and Sectarian Violence are some of them. While I think Poison Planet probably has the most to say of all these bands, musically they’re not as good as Coke Bust or Vaccine. The music on Boycott Everything is a bit sloppy and the vocals of 9 volt should be way more angry. But let’s forget about the music for once. Here’s a band that’s taking the straight edge philosophy and explaining why it’s an act of political activism. And I’m all in favour of that.