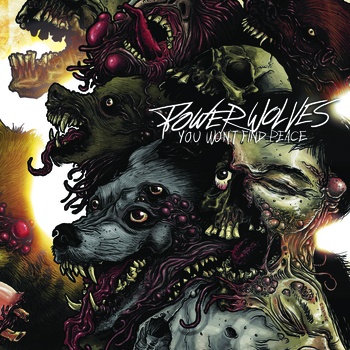 The first time I heard of the band Powerwolves, was in a Panic Records email newsletter.  In the email, Timm of Panic Records/Trial explained how he had listened to the bands 2010 demo and offered to release the demo on Panic before the band even played their first show.  At the time, the band politely declined until they could get some experience under their belt.  When the band was getting ready to record their first full length Timm again offered to do a release with the band and this time the band accepted.  The resulting release is the band’s debut LP entitled “You Won’t Find Peace”.  After hearing that story, being a big Trial fan, a fan of several other Panic releases, I couldn’t wait to hear the LP and jumped at this chance to take a listen.

Powerwolves is from Massachusetts’s. Merrimack Valley, an area with a history of producing some big name hardcore bands.  Band like Ten Yard Fight, Converge, Guns Up!, and Shipwreck, have all called the Merrimack Valley home.  Powerwolves’ have a sound that is definitely reminiscent of these and other MVHC/Boston bands.  One such similarity that jumped out to me is to Boston band, The Hope Conspiracy.  The band also draws on some other influences outside their home base, and carve out their own take on metallic hardcore music in this LP “You Won’t Find Peace”.

The band opens the record with the song “Behind This Face”, and blasts through this song in exactly one minute.  This should give you an idea of the urgency in this record.  The songs on the record are all pretty quick but never feel rushed. The band throws in a few “mosh” parts without over using them, as many other heavy/metallic hardcore bands tend to do.  This makes the record fun while still allowing the band a chance to give their music a little more depth throwing in some  interesting guitar work and lead riffs.  The vocals on the record are just as aggressive as the music and add to the record’s already heavy presence.  The lyrical topics on the record are pretty varied as the band touches on topics from personal relationships in the song “The Chaos You Made” to global politics on “You Won’t Find Peace”.  Without having liner notes/lyric sheet and a solid grip on all of the lyrics, I won’t spend anymore of this review on the lyrical content of this record.  You can check the songs out for yourself and see if you make a personal connection with the band.

The production on “You Won’t Find Peace” is very well done and helps to showcase the band’s talent.  This is something I noticed on the first listen through and definitely kept my interest on subsequent listens.  The guitar tones are thick and heavy and give the already heavy riffs some extra punch.  The drums on the record sound huge and have a ton of depth. The production is very clean heavy the whole way through and really helps to round out this release.

For anyone that hasn’t heard or heard Powerwolves, you can check out a stream of this record or the band’s 2010 Demo on the Powerwolves’ bandcamp (http://powerwolves.bandcamp.com).  “You Won’t Find Peace” is available now on CD and LP through Panic Records and several other punk/hardcore distros and record stores.  The LP is available on Blood Red, Dark Gray, and Black vinyl.  Purchasing the record through Panic will also net you a free download of the record as well.