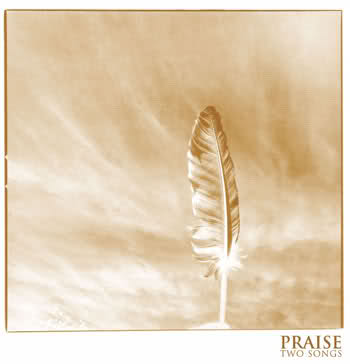 For those not in the know, Praise is a band with Champion bassplayer Andy Norton on vocals (And I think members of Mindset are involved as well). Their previous 7″ ‘Growing.Changing.Healing’ is one of my favourite 7″ from 2010 despite the rather strange artwork.

For ‘Two Songs’ the band teamed up with Jason Mazzola (Cloak/Dagger, Count Me Out) for the artwork and the result is something that matches the DC Revolution Summer inspired music of Praise. This doesn’t mean that the band sounds like Rites Of Spring or Embrace. No, Praise is a band mixing up the Dischord sound with more basic youth crew. This already resulted in great songs like ‘I Believe’ on the first 7″.

It’s this mixture of influences both in lycrics as music that sets Praise apart from the more generic youth crew bands like Get The Most and probably is the reason that not every youth crew enthusiast is collecting Praise vinyl. On the other hand, people who like melodic hardcore but are put off by the image and lyrics of youth crew bands will love Praise.

I got mixed feelings about ‘Two Songs’ to be honest. Both of the new songs are really good and easily match up with the first 7″. Yet, it are only two songs. I want more Praise than that! On their blog the band announced that they will be recording a full length this winter. Till that one comes out ‘Two Songs’ is bareley enough to satisfy me. For anyone else into Praise I’d suggest you also get the free Praise – Live at WMUC download here.