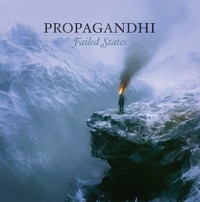 Our goal is always to create a no-holds-barred, forward-thinking, tip-of-the-hat to the giants — Voivod, Rush, NoMeansNo, SNFU, Sacrifice, Razor, Guilt Parade – that have gone before us. We are in their debt and take the mission seriously. Even when we’re singing about liking Kurt Russell as Captain Ron, we take the mission seriously. Failed States is our most formidable – and to me personally, our most surprising — attempt at conjuring the numinous from the quotidian. Yes, I had to look those words up.

Says Propagandhi frontman Chris Hannah about the sixth record of his band. The first for Epitaph. Well spoken, but anyone who has followed the Canadian band ever since 1993’s debut How To Clean Everything knows Hannah has always been a verbal person.

Long gone however are the days of snotty skate board punk. Over the years Propagandhi has morphed into a crossover beast of punk and trash metal. Riffs inspired by Bolt Thrower fused with the rage and urgency more often seen in hardcore, hell some of these songs remind me of Trial somehow.

Where most bands mellow out in their later days it seems that Propagandhi is even more focused and gritting now then they ever were. The sum of it all results in the best Propagandhi record to date.