Protestant – In thy name 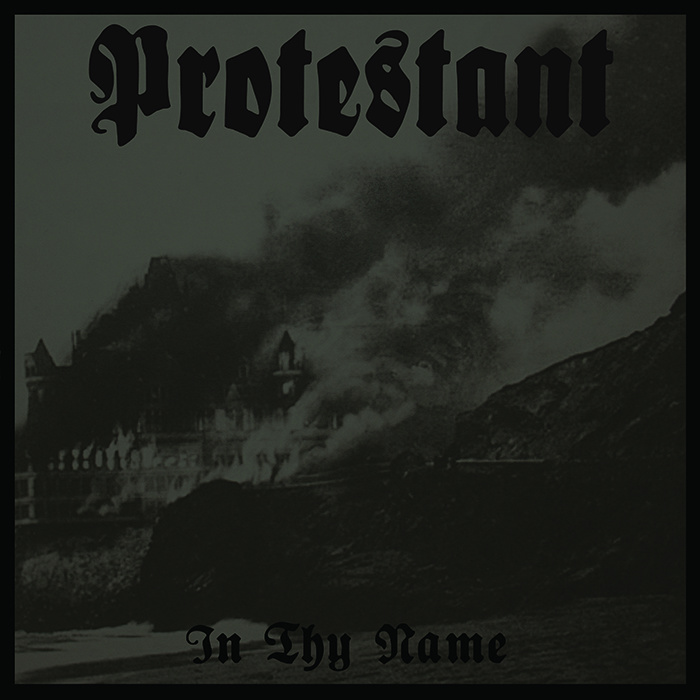 Only seconds after I put the needle down on the new Protestant album In thy name I frown, turn, walk back to my record player and stop the record. Why? To check the label and see if the distro I ordered it from accidentally mixed up my order and sent me a black metal record. Perhaps some lost Darkthrone tracks from the Ravishing Grimness period? The distro didn’t, Protestant changed. Quite a bit.

For those who are not familiar with the band, Protestant is a crust band that has been around for about ten years now. They have released a steady stream of albums, ep’s and a couple of splits. The style displayed on those releases is pretty consistent (with the exception of the split with Suffering Mind perhaps, where they bordered on grindcore). Crusty riffs, harsh vocals and very tight, almost mechanic sounding drums is what you can expect from Protestant. For me, that drum sound is always something to get used to on their releases.

But that’s all in the past. The band has discovered the beauty of black metal and incorporated influences from that scene into their sound. The opening riff of the album could have been written by Darkthrone for example. And there’s lots of other parts where the band throws riffs around Fenriz and Nocturno Culto could be jealous of. At the same time the band does not hide it’s crust origins leading to an interesting mix of the two genres. The beauty is how the band incorporated those influences into what we’re used to from Protestant.

Personally I like this development. I can imagine crust purist being disappointed by the metal-injection, but the band sounds immensely heavy and pissed off now. The black metal influences add that edge to the sound that makes the music hit harder then ever before.

I’m curious to see if the band will continue to write music in this style or if this is a one time side-step. Based on the tempo with which they release music we will not have to wait long to find out. I don’t expect it matters to them, but I hope they will continue to move down this path.