Queenscore 2013: No Turning Back + Backtrack + All For Nothing + Many more 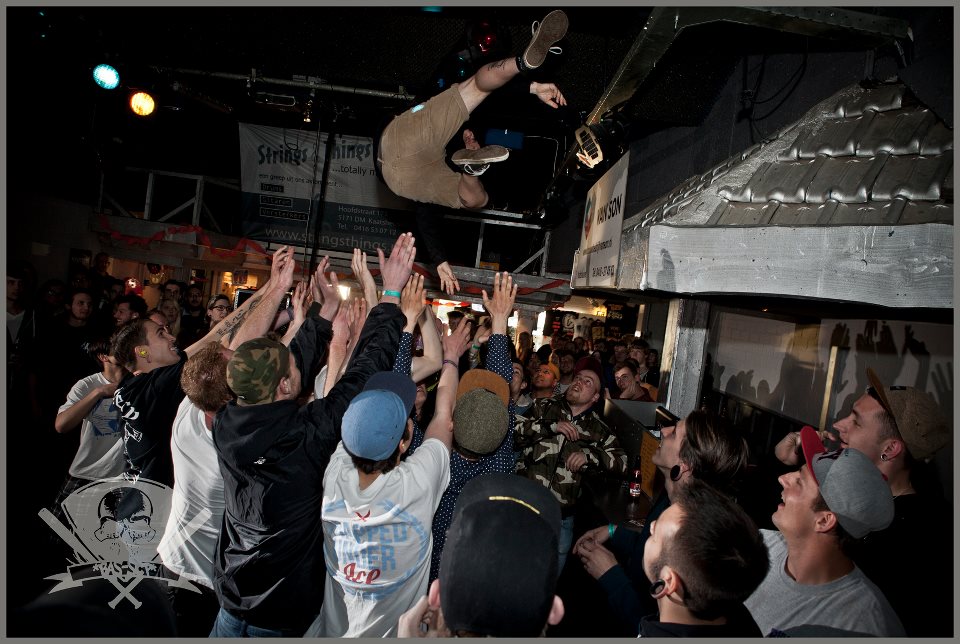 Where many flock to Holland’s capital to get drunk dressed up as an orange wooden shoe or tulip each year on April 30th (our national holiday, ‘Queensday’, don’t ask…), my agenda has been reserved for Queenscore (or The Queen’s Metalcore, as the fest was officially called until this edition) in Kaatsheuvel. The Crossroads youth center has hosted some pretty cool editions in the past, but this definately was the best one yet: a very cool and varied line up, a sold-out house, 200 kids ready and willing to party, good to great performances by all bands, confetti canons, piggybackrides and a high fives to stage dives ratio that would make Vogel proud.

I missed most of Hawser‘s set because of some much needed socializing, but the bit of it I saw impressed me more than the last time I saw them play. Their young frontman has grown in his role and their music now has a bit of that evil Pulling Teeth / Brutality Will Prevail vibe. The place was already pretty crowded and the band brought some friends along to start the first pit of the day.

Local youngsters Discreator were up next. I always get a bit nervous when a yound band attempts to display some Killswitch Engage worship, because they usually bite of a bit more than they can chew. Fortunately, Discreator has the most important factor sorted out: a very good vocalist. This dude has a great scream as well as a good, powerfull clean singing voice. Musically, their songwriting could be bit tighter and less conveluted, but overall this is definately a band to keep an eye on. 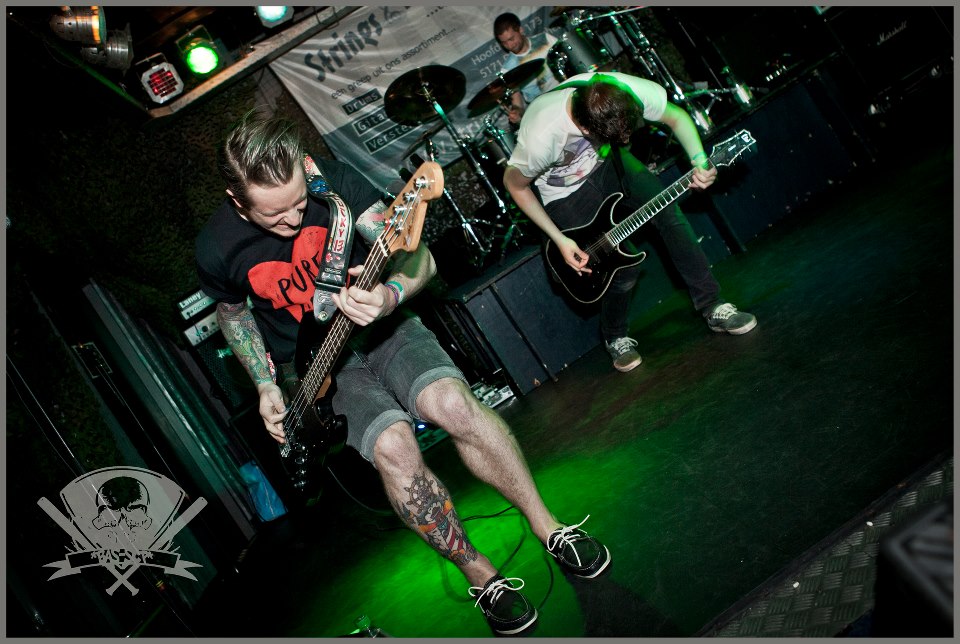 As Heavens Collide is calling it quits soon and is currently on their final stretch of shows. Even though they are skilled musicians, I have never found anything in their music that caught my attention, so I chose to catch some sun, chilling in the meadow besides the venue. 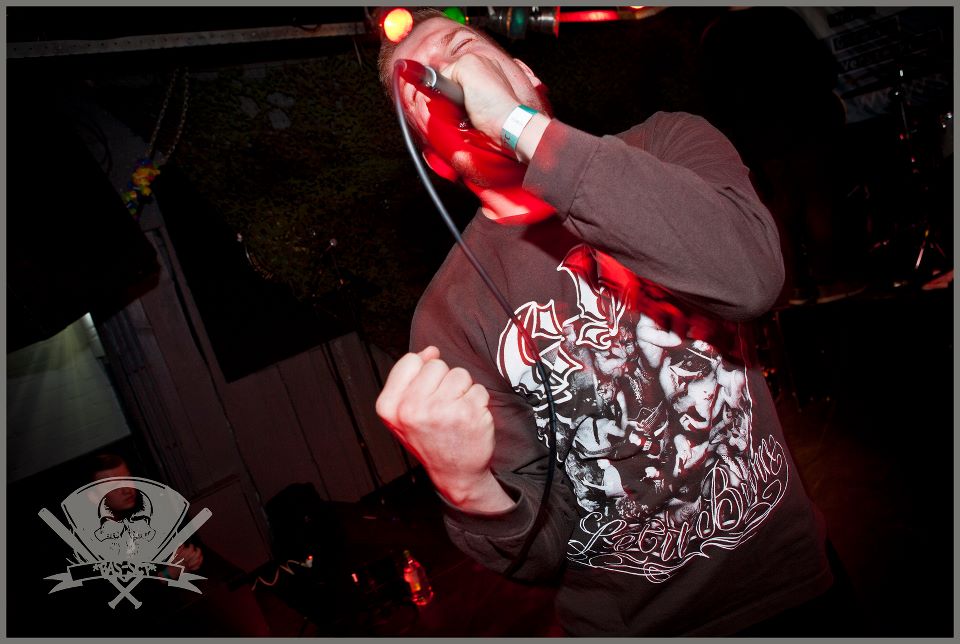 I hadn’t heard of Choking On Illusions from Germany before, but they proved to be the first big surprise of the day. Their tight intense hardcore with wavering melodies reminded me of bands like Counterparts and Hundredth mixed with some The Ghost Inside. Overall, this band had a really positive vibe that carried over to the audience. Their singer even got off stage to help an unfortunate mosher find back his chipped tooth (a search that was not aided by the fact somebody had scattered a full box of TicTac’s across the venue floor..). 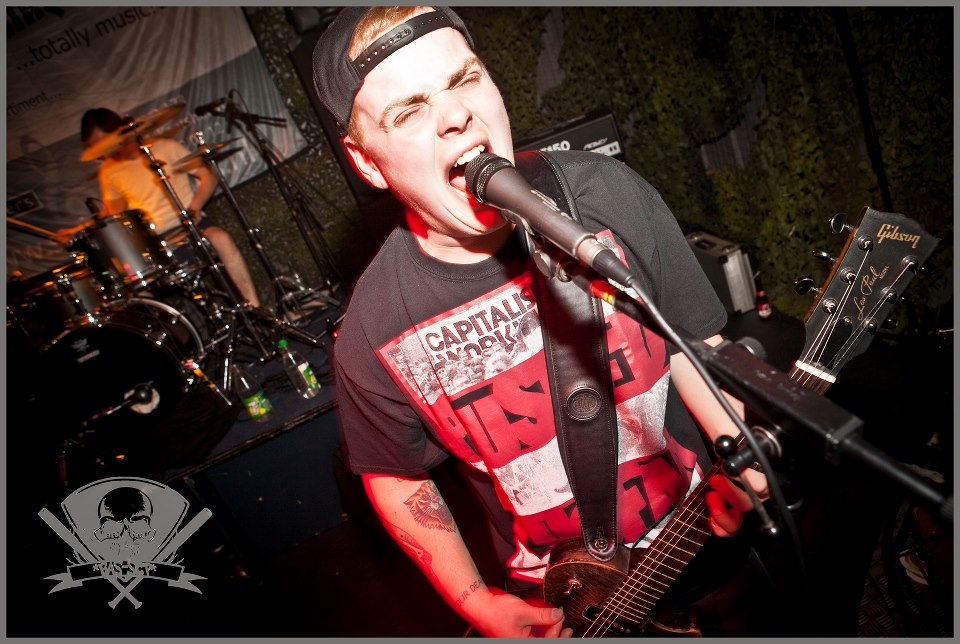 Defy The Crown are quickly becoming a force to be reckoned with, because every show I see them do is better than the last. Today was no exception. People into no frills New York style hardcore with a good groove need to take notice, because DTC will be right up their alley. Their set ended with Bulldoze’ The Truth, causing some honest hard action on the dancefloor. 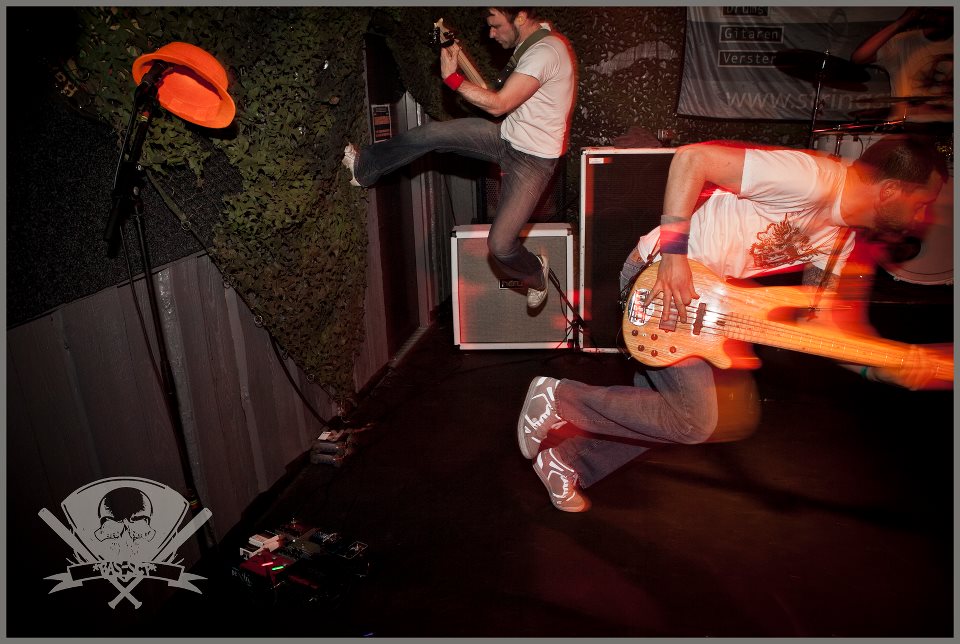 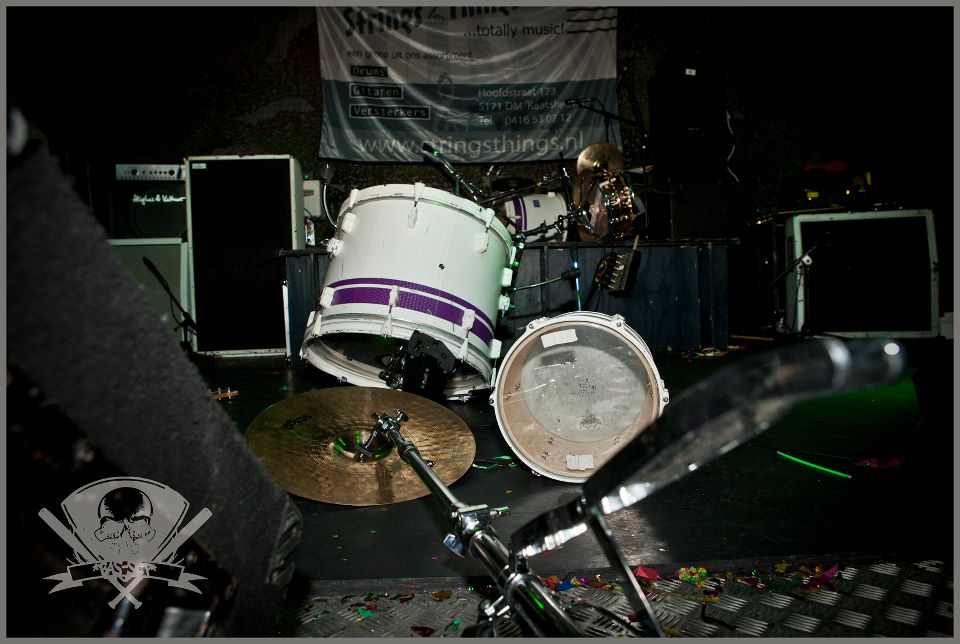 I had never heard of BEAR from Antwerp before (even though they’ve been around since 2010, with two records under their belt), but when I saw Serch (The Setup, Kickback, Overlord) sitting behind the drum kit, I knew I was in for something tight. AND HOLY MOTHER OF EVERYTHING THAT IS TIGHT: that shit was T.I.G.H.T. This band is completely bonkers, with bandmembers literally bouncing off the walls while playing frantic, hectic, insanely heavy metal/hardcore, somewhere between Imprint-era Vision of Disorder and Textures. Their set ended with the guitar and bass player bashing their instruments into the symbal stands, while Serch wrecked all his gear, literally smashing his drums on the stage, leaving the crowd blown away and with their mouths agape. Awesome. 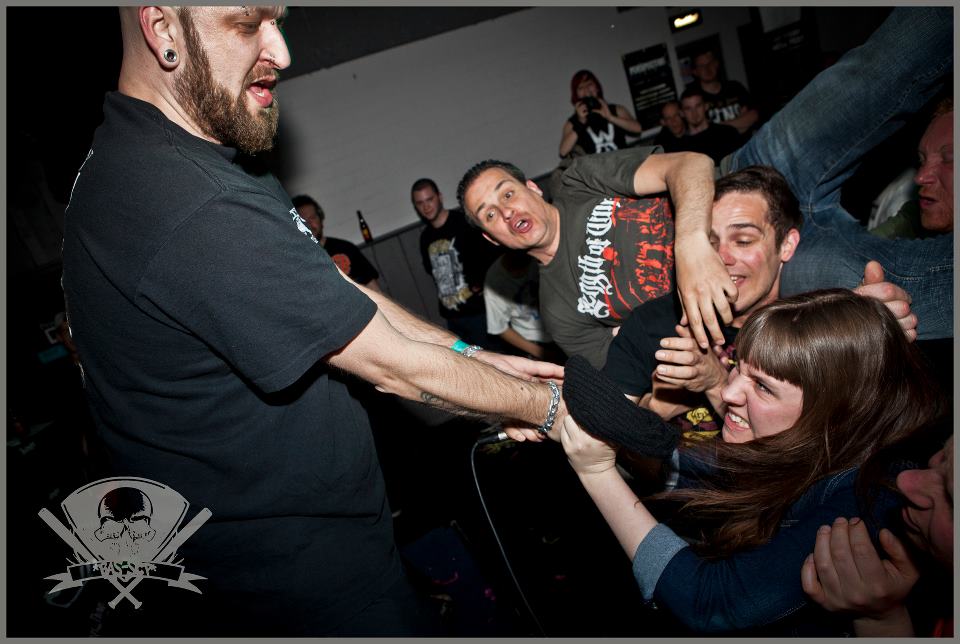 I was afraid Drain-Life‘s hefty, bourish mix of Merauder and All Out War would fall somewhat flat on the wreckage left behind by BEAR, but I could not have been more wrong. The chuggah-grooves came rolling off the stage heavy as fuck and singer Yorick knew how to stir up the crowd with his impressive presence and vocal growls. Drain-Life finished things off with no less than two Arkangel covers (one of them Within The Walls Of Babylon, the other one currently escapes me), turning the dancefloor into an armageddon of nineties moshing mayhem. 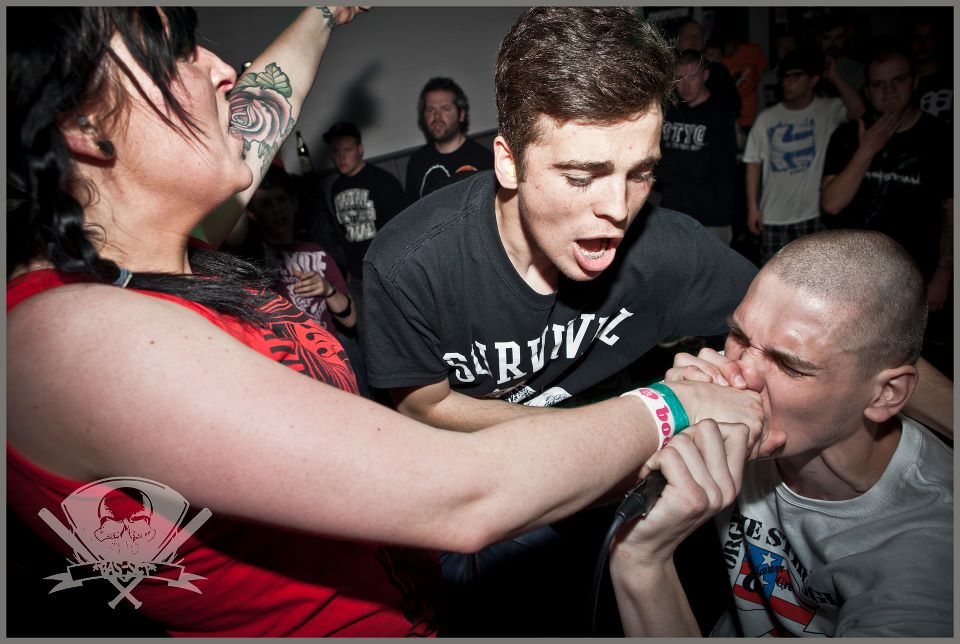 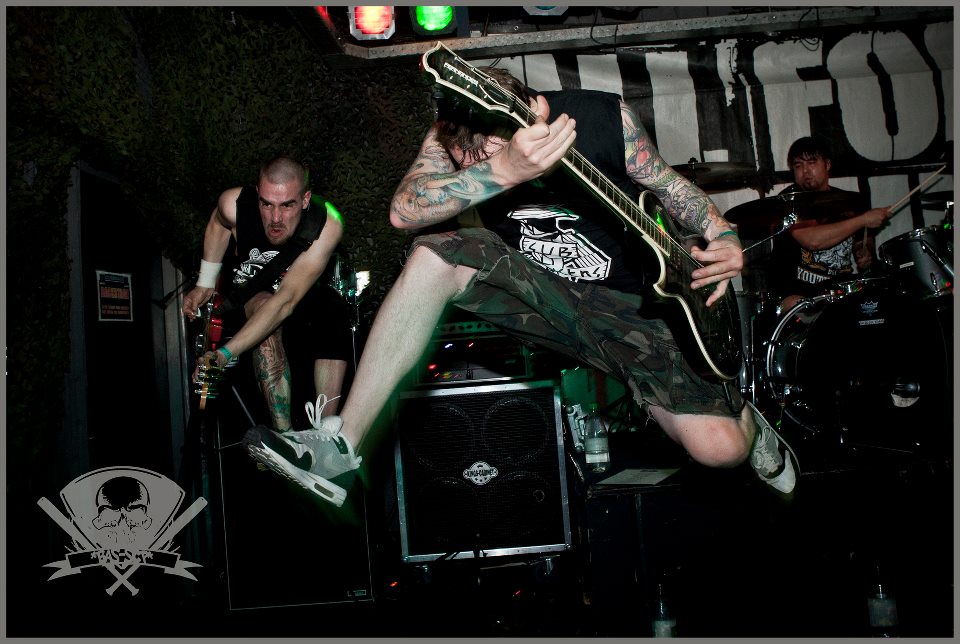 Rotterdam’s finest All For Nothing may be on their umpteenth line up by now (they recently replaced their drummer, a guitar player and a bass player), the band seems more powerful than ever before. Especially new bass player Joost (ex-All Heads Rise) brings a lot of energy and enthousiasm to the stage. For some reason this band not always gets the love they deserve (and do get across our borders) when playing in The Netherlands, but today the crowd ate it all up. A good set with lot’s of favorites from the band’s catalogue. Too bad a slight miscommunication with the DJ prevented them from playing an encore. 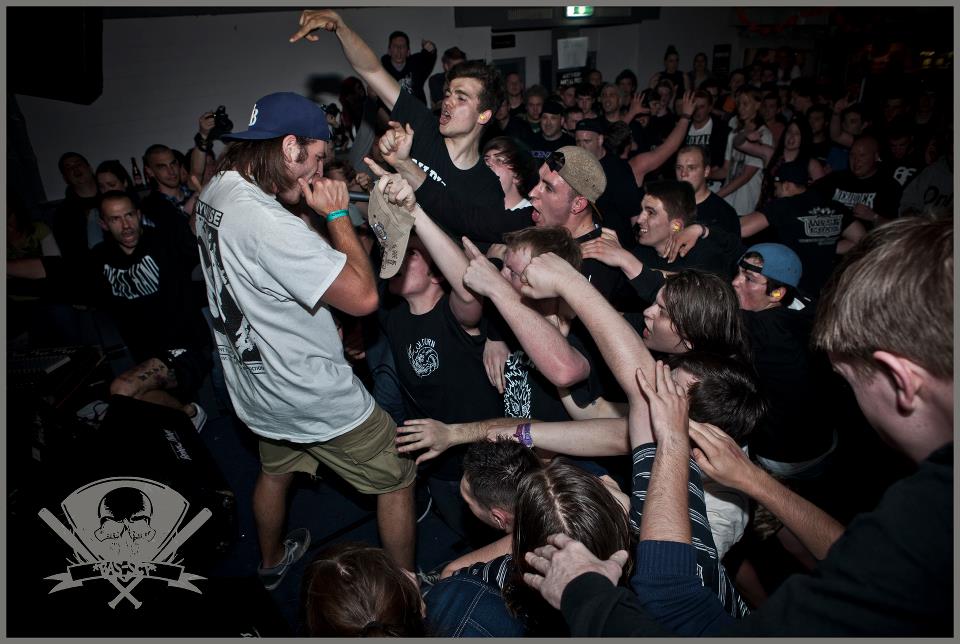 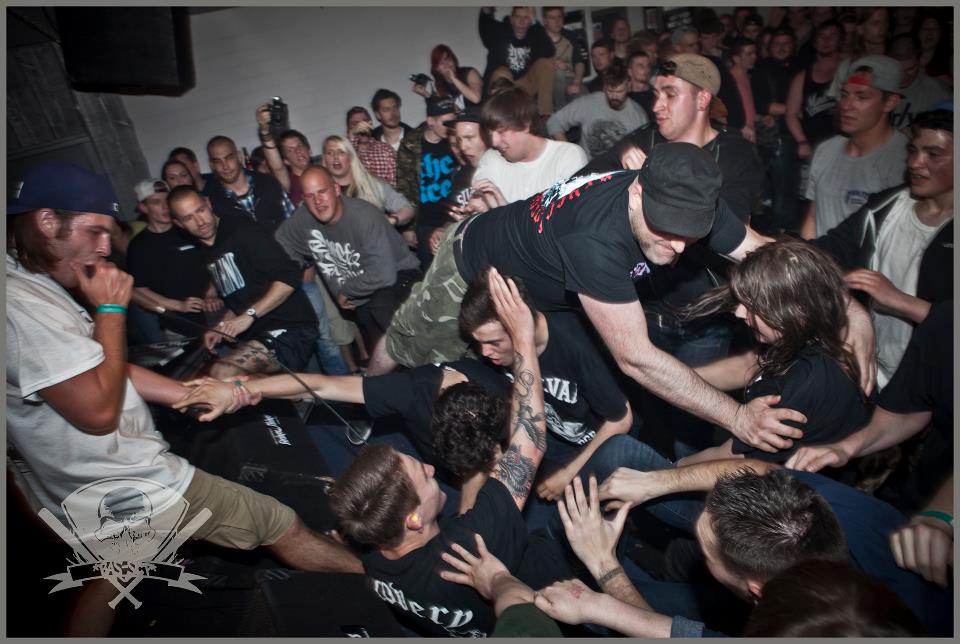 Backtrack from New York had a day off between their European tour with Comeback Kid and a run of UK dates together with Trapped Under Ice and were happy to fill that void with their only small club show during this journey through the old world. Needless to say, most people where there especially to see Backtrack. The room was packed and exploded when the first song hit. Lot’s of stagedives, sing-a-longs and dancefloor action and an energetic and eager band made for a great party. Personally, I’m not as impressed with Backtrack’s music as other people are, but I stood there watching everything with a huge smile on my face (and couldn’t resist some diving action either). This is what every hardcore show should be like. 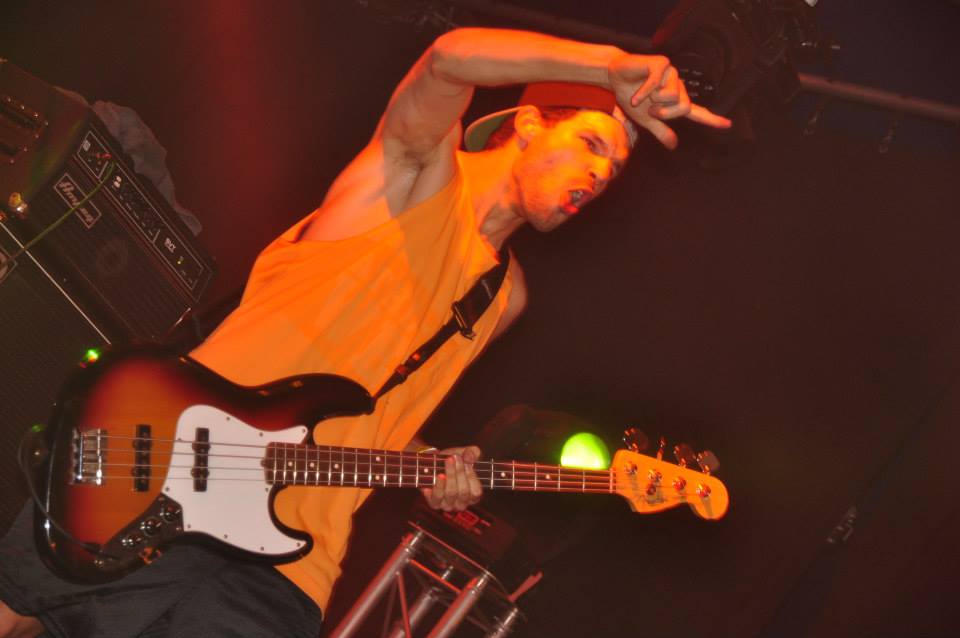 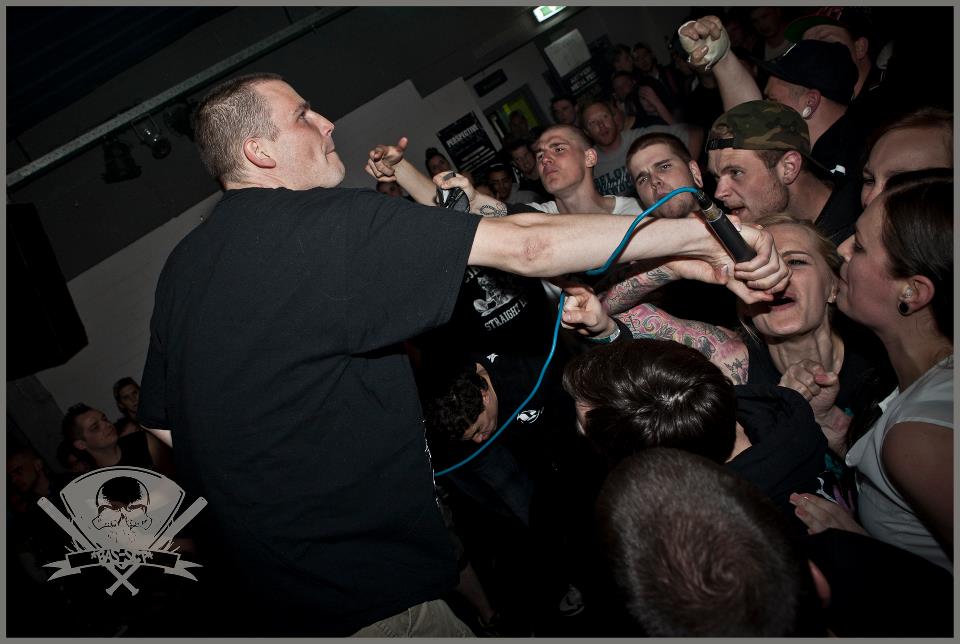 After Backtrack’s set, No Turning Back had the room served to them on a silver platter. Leave it to Martijn to urge on an already pumped up crowd. I thought it was pretty cool as well to see some members of Backtrack up front going nuts. A setlist with only hits, shoutouts to the Efteling (the venue is literally around the corner from the famous Dutch amusement park), more flying and screaming kids and a great athmospere concluded an epic day of hardcore in Brabant.

I can’t wait to see what Queenscore (of will it be Kingscore by then?) will come up with next year. This edition surely will be very hard to top. 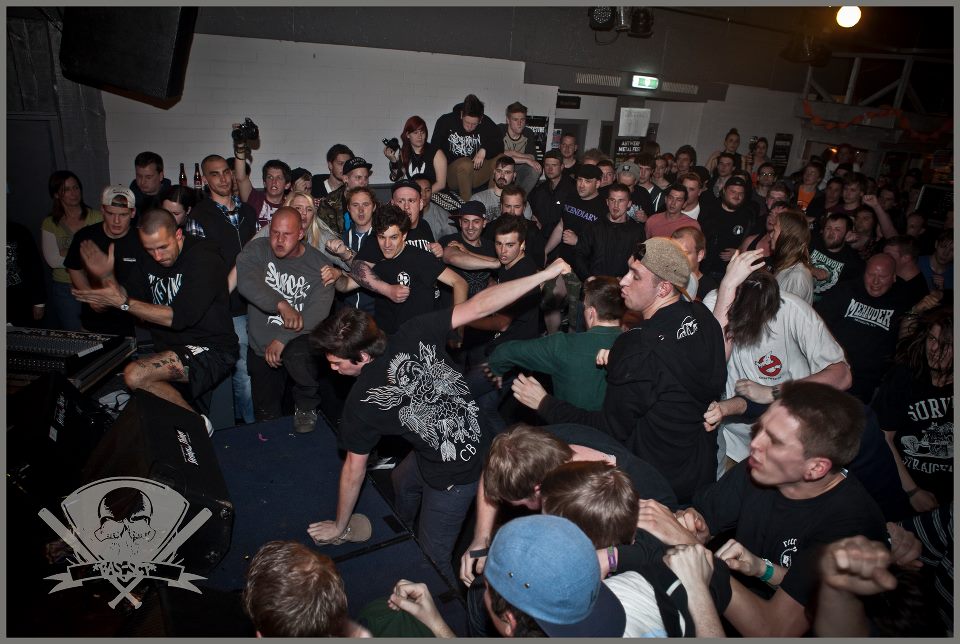 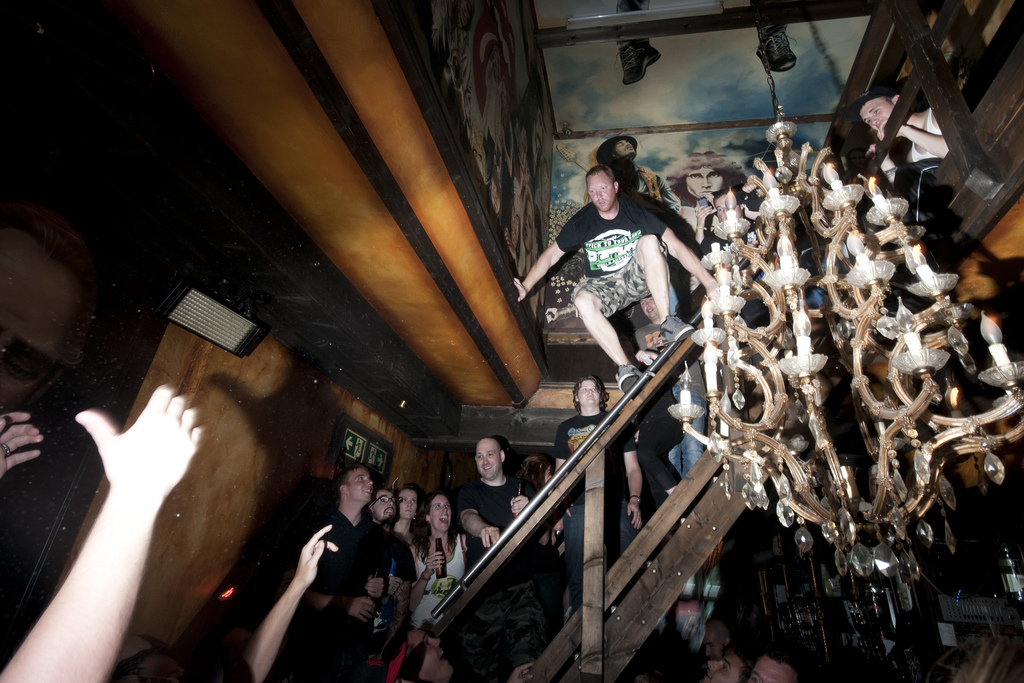 All pictures by Bas Spierings / Bas-SCP. Check out all of his Queenscore pics in 2 sets here and here.
Viewer discretion is advised…these sets may or may not feature images of this loyal SWNK-scribe’s ripped up camo shorts…

Bands: No Turning Back, Backtrack, All For Nothing, Drain-Life, BEAR, Defy The Crown, Choking On Illusions, As Heavens Collide, Discreator, Hawser