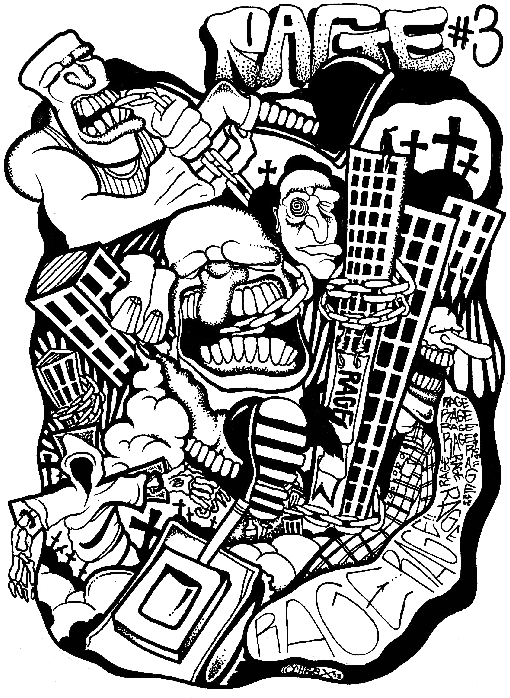 Sometimes you keep putting off something that needs to be done (Am I the only thinking of Antidote just typing a line like that?). Like writing this review of Rage #3. And I don’t exactly know why to be honest. Maybe it was the weather and the fact I had some time off. When the weather was great I rather sat in the garden reading Batman comics. And when my vacation was over I was busier than ever. But it could also have been the lay-out. Small type and a really bland ‘made-this-in-Word’ kinda look (not counting the cover drawing, which is great). Just not exactly inviting you to start reading. Or maybe I just was being a lazy bum. Either way, time to get it done.

In the intro they’re saying they’ve only been doing this for 8/9 months… 8/9 months and already 3 issues? Holy shit… I took me a couple of years to put out only 2 issues… So for that alone they deserve some credit. Aside from that they’re also saying #4 will be massively revamped. So I will not push that issue too far. Let’s have a look at the content…

84 pages, half A4 sized. Not bad, not bad at all. But that’s just quantity of course, is it any good?

There’s fun stuff in there like a guide on how to enter “DA PIT”, with tips like this:

Getting the correct face is important too. You gotta get it right for the mood of the music. Shattered Realm? Inverted eyebrows, clenched teeth.

Or in the “Essentials for a good hardcore show” column:

Wear shorts!!! Must be worn if you intend on an intense mosh session. My personal choice are Spanish swimming shorts, high range of movements.

The interviews vary. From single page, lame 1 sentence answers (War Hungry / Cold World interview) to a couple of 4 page long interviews that read like a conversation. Also interesting to see an interview with the creator of the zine in it (fittingly titled “Tables Turned”), gives you a good idea of who the guy is. Although you get an idea of that by reading the many columns. Which are actually the best part of this zine if you ask me. You don’t have to agree with all of them, but it’s clear (and literally stated a couple of times) that they want to make you think. The passion, the dedication (no matter how shallow that word might have become in hardcore) oozes from these pages and that’s great. I really hope they keep that up.

Is it the best zine ever? No. Is it bad? Far from it. If they do improve the layout like they’re saying in the intro and focus on the longer interviews we might have a winner. I did enjoy the zine, but there’s a lot of potential to become even better.

Let’s see how long it takes them to get out #4, if they’ll be as fast as with the previous #3 issues, it probably will not be long after you read this review…

PS > I keep saying “they” in this review because in the zine itself ‘they’ use “we”, but I’m not sure 100% sure if there are actually more people working on this zine. If it’s a one man job, the 3 zines in 8/9 months is even more impressive.