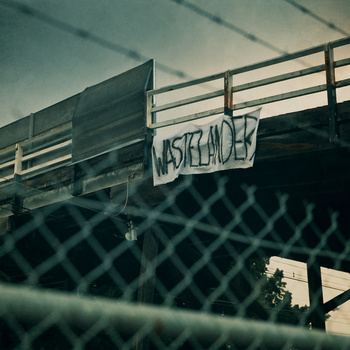 I am quite as much a hip hop fan as I am a hardcore fan and If you’re the tiniest bit into hip hop you could not have missed Ratking’s ‘Wikispeaks’ a few months ago. A hip hop track which exploded like a bomb in the scene. Anyway this New York hip hop group dropped a EP called ‘Wiki93’ and when I tried to listen this EP on Spotify it always popped up with another EP called ‘Wastelander’.

I’ve started listening to this kind of ‘mysterious’ record and they aced it. Brutal and fast hardcore in the likes of Trash Talk. I fell in love instantly. Till this day I’m not sure if these two Ratkings are actually one Ratking. If I look at Facebook they’re not even involved in one crew but if I see the hip hop king touring along with Trash Talk it is too freaking random that these bands started around the same time with the same name in the same freaking genre!

Now I know it’s kind of weird to start a review with this whole lot, but I thought to myself I had to mention this. Because if they are in some way related, I am the sharp one. And if not I probably made you listen to two of your future favorite bands. At least one….cause this ‘Wastelander’ EP is absolutely fucking amazing.

Title track is the first track on the record and is a majestic opening. A rough and slow beat backs some good  guitar work and brutal vocals, which never are consequent. Non consequent being a good thing here, cause when the next song starts it sounds like they have a different singer. Where the first track sounded very brutal he now switches on to a trash voice in a style which reminds of a modern Kurt Brecht. The four middle tracks are each equally amazing. The EP ends with ‘Bloody Fucking Empire’, an anthem which will stick with you for the rest of your day.

This EP is a very diverse modern hardcore record in a sort off more melodic Trash Talk and if you liked that Rotting Out record you’re gonna love this. Everything is just right from the very cool artwork to the diversity in speedy punkrock and slow hardcore, the dynamic vocals and also lyrically standing tall. Anyway, check this record out, you will not be let down. If I look past Paint It Black’s ‘Invisible’ this sure is my record of the year!