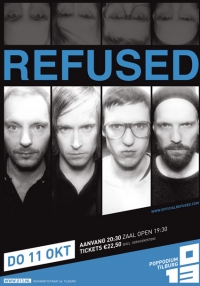 ‘This is the last show of our European club tour so I’ll give you 75 percent.. oh wait 98, oh okay I promise I’ll give you 100 percent. You’ll see’, says Dennis Lyxzen halfway through the set. And he makes up to his promise moments later by going into the pit and getting up on the soundman’s mixing panel. Lyxzen is the big entertainer and the 013 is his stage. The whole show was theater from the get go.

The other time I saw Refused in Tilburg was when they opened up for Millencolin. Pre-Shape Of Punk To Come. Back then they were one of the many punk and hardcore bands from Sweden. They were good but only known to the hardcore crowd. They were not the hip(ster) band they later became.

I personally think that last record was a bit too pretentious but I was pretty much alone in the Tilburg crowd judging by the massive response the band got on songs like ‘New Noise’ and ‘Worm of the senses’. Well everyone knew the words to ‘Rather Be Dead’ and ‘Coup d’Etat’ as well so they did their homework.

I had my doubts beforehand on Refused’s comeback. But the band does deliver. It is everything one could ever imagine about Shape Of Punk To Come in a live setting and more. Lyxzen is one of the best entertainers out there acting like a younger Mick Jagger meets Iggy Pop. I don’t recall the 013 going off on a hardcore band like this before.

The whole evening could have done without the anti-capitalism speech though. Or does the band donate the profit of merchandise sales (20 euros a shirt) to some NGO?

Refused in 2012 is an event. It’s almost theater, especially after the whole set was done. They got the kind of send off one usually sees in the theater. But it was well earned.

The big question now is what’s going to happen next. Will the band disband again or are they so thrilled about their recent success that they’re considering to write a new record? In a way Lyxzen and his gang of New Romantics are just to good to waste this talent.