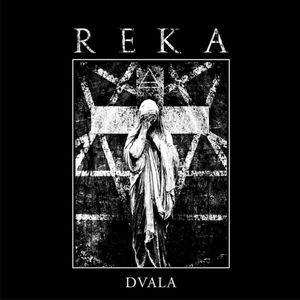 The best Russian band is returning with a new one-sided EP they recorded with friends from the band Amalthea. The song Dvala is divided in two parts and on the backside a monumental statue as screen print. I searched on the internet what the word Dvala means but I have still no idea. I found an interview with Reka online where they explained a bit more about the record. As expected the wall of sound with screaming vocals has a message too!

The members of Reka are critical at the current situation in Russia. People stop asking questions and just follow the opinion of the majority, especially when it concerns a political choice. People are willing to forget their beliefs, lessons of the past and choose the nationalist parties, not realizing what consequences this may result in in the future. When you follow the news this is happening right now in Russia but also in Sweden (as the guys from Amalthea explained) and of course in the Netherlands.

Reka is still striding against this mentality and more bands/people should. I don’t know how many people the band is reaching with their slow moving Post-Metal, but they always have my vote; both for being critical and the musical quality. Again the band excels in writing a long story where the listener is caught into as your next favorite movie.

Per Skytt from Amalthea is screaming out his lungs this time (Reka had the bassist of Celeste as vocalist in the past for example) and the band still proves how to keep the stranglehold tight in a genre that had its peak a long time ago. The monumental and repeating riffs are keeping you focused as always and I cannot wait to hear again from the band.