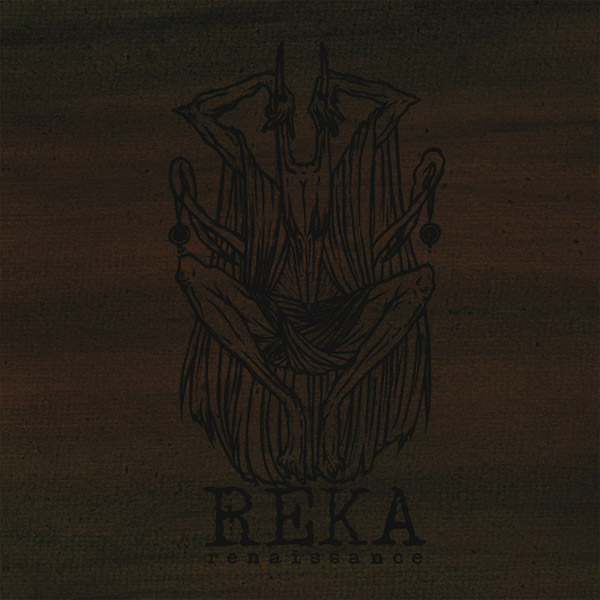 *On last year’s Fluff Fest (Czech Republic) the Moscow, Russia based band Reka was one of the few surprises. The heavy and sludgy music sounded as dark as Amen Ra but faster and more aggressive. In their homeland Reka already released three records simply entitled ‘I’, ‘II’ and ‘III’. In West-Europa they are not that known yet, so it’s a great idea of Moment of Collapse to introduce this dark outfit in West-Europa.

Renaissance is a modified version of the latest record, but put on vinyl now. The remastered version sounds a bit heavier, always welcome for this type of music. The singer of Celeste shares his intense screams on this record and that’s a good thing, his vocals simply have the right bite for this melancholic and dark music. And it gives the band some exposure as well.

Although ‘Dépendance’ has a very strong Amen Ra feel, it’s the most outstanding song on the record due to the slow expanding and repeating melody line. Amen Ra would have wished they’ve written this one. ‘Déconvenue’ is almost as good as the one before. It starts with a very heavy riff accompanied with bashing drums that slowly transfers into a melancholic riff. The atmosphere of this song is great and it ends again with that heavy riff.

In ‘Châtiment’ the throttle has been found and although it’s slower as Celeste, this song feels like them, not only because of the vocals. It only makes the record more diverse in a genre that sticks close to the same style of riffs and structures. In this niche of heavy music the Russians of Reka have definitely found their place. Renaissance proves it!