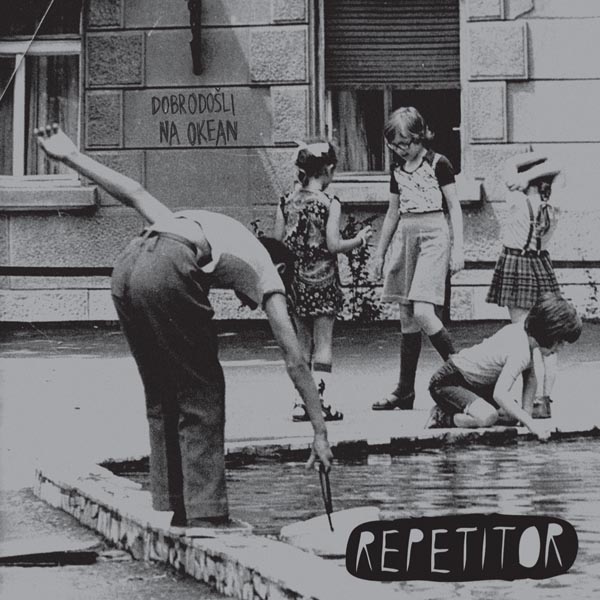 Belgrade is on the rise again, which means music is also coming from the city on the Balkan again. With groups such as Repetitor, who just released their new album Dobrodošli na okean. It’s the second album from this band, which was founded by Milena Milutinović (drums) and Boris Vlastelica (guitar, vocals). Later Ana-Marija Cupin (bass, vocals) was added and that completed the outfit.

The influences have never been much of a mystery, it’s early ninetees grunge and early post-hardcore and noise like Fugazi and Sonic Youth. Undoubtedly national predecessors like Šarlo Akrobata also had their impact. The band bio also names the likes of Black Sabbath and Suicide, but both might be a little far fetched. The mix becomes rather eclectic anyways, which is something you can hear pretty often in eastern-European bands. That is what makes a band like Repetitor so cool.

Powerfull and heavy the record opens with ‘Devojke idu u Minhen’, which sounds a bit more like a steaming track of heavy stonerrock, pounding away for the biggest part of the song. Then the shouted vocals kick in, filled with a dark emotional tang. ‘Biću bolji’ sounds more like a jangling piece of garage rock with punkrock, spoken-word-ish, vocals blurted out over the few quieter parts, from where the band departs to make another soundsplash in the sonic pool they love to stir up. ‘Šteta’ takes it down a notch with a minimal intro of  a tasty bassline and the typical vocals of Boris, that seem to be totally separate from the song itself at times. These parts get broken up with high soaring guitar parts, that take the song up in the air and then drop it down to the ground again a moment later.

Classic drums open up ‘U pravon trenutku’, which gets his pounding rhytm when the bass kicks in. The guitar completes the sound to tightly played rhythm with vocals that remind a bit of the sound Nick Cave makes with Grinderman, including the sudden explosions of sound. A bit less gritty, not less fun though. ‘Dostumpni i laki’ has those high pitched, overdriven guitar sounds that drive the song forwards. Crackling distortion adds up to its exciting sound. The band sticks to a very neatly played rhythm though, on all the songs. ‘Lica’ is no exception. In that sense they fit right in with the tight stoner sound you hear in these times, though the Serbians never drift of in wavering sound patterns. Every exclamatory riff or solo moment seems well calculated.

‘Oktobarski Salon’ sounds wild and uncontrolled with its distorted, low and high pitched flaring guitar parts, but the bass is running like clockwork again. The same goes for ‘Laka Zabava’. Pulsating and driven, the bass is probably one of the things I admire most in the sound of these guys. The album closes with a ninth track that is acoustic guitar picking and vocals that sound stiff and uncaring, maybe it’s more tired and battle worn. It sounds fitting however. Moonlee Records keeps amazing me with releases like this. Even when you don’t understand a word, they know what a bit of good music sounds like. Repetitor definitely doesn’t repeat itself on this album.