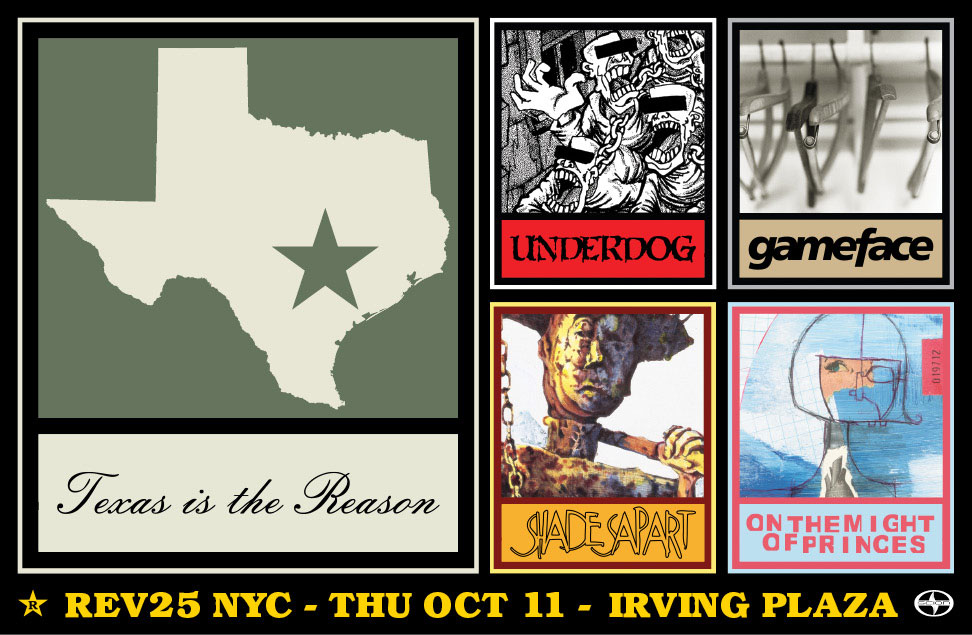 Revelation Records are celebrating their 25th anniversary big time with a couple of showcases. Jean-Paul & Mazzel Gijs will be reporting every day for the next couple of days. So for everyone who’s missing out on this (I feel you, wish I could be there), here’s their report:

After an early at dinner at Blossoms’ in the Upper West part of town we headed back to our temporary apartment in Brooklyn to have a power nap before the show. Not only the jet lag is kicking in, but also heavy shopping, intense eating and lots of walking during the day.

By the time we got at the venue and picked up our four day passes On The Might Of Princess already played. We missed out on their set.

Gameface was up next. The first band we really wanted to see. They played quite some songs off their best record “Every Last Time”, but they didn’t forget to play a couple of songs of earlier work from “Good” and “Three To Get Ready”. Although the band started playing again just recently for the Revelation Records showcases, it didn’t show in their performance. Jeff Caudill and the other Gamefacers really seemed to enjoy being on stage again. And this showed off. In their 30 minutes set.

Next band on the bill, to our surprise, was Shades Apart. Musically this band is really good, but their college rock influenced punk rock tunes were definitely not for everyone. Not only were we surprised that they ended up on the time table after Gameface, but lots of people walked away during their set consisting of just songs from both their Revelation releases. Most people were anxiously waiting for the next band to go up: Underdog.

By the time Underdog kicked off, Irving Plaza is packed. Opening with the song “From now on” the place is on fire. Being the only hardcore band on the bill tonight they once more define what New York Hardcore stood for back in the days. These four talented musicians created an own sound mixing hardcore with reggae without sounding like the Bad Brains. Their set contained all ingredients of a great show appreciated by both young and old.

Looking back, the wait was long to finally see Texas Is The Reason again on stage for the first time since their 1997 Euro tour. From the moment the intro started you could feel the tension grow from over a thousand enthousiastic people in the room: sing alongs, stage dives and dancing it all was there. They even performed a brand new song. Does that mean the band is back together again and we can expect a new record in the near future? Unfortunately we couldn’t watch the entire set as we were among the lucky few who got invited to the Chain Of Strength after party show. For that we had to travel to a different part in town.

By the time we arrived at the “Acheron” venue somewhere in Williamsburg, the place was packed with definitely more than 200 kids. we watched Clear finishing their set. Too bad we missed out on their set, as they were a bunch of youth crew kids playing early 80s Boston style hardcore. Pretty intense! The good thing is that the wait for Chain Of Strength, since 1992, was almost over. As soon as the intro of “Impact” starts the place literally explodes. Picture a small stage in the corner of a tiny room. Over two hundred kids going ape nuts and stage dives from where ever they could find something to jump off. All songs played within 30 minutes and about to leave us without playing “True Till Death”… But eventually the Chain ended their show with this classic.