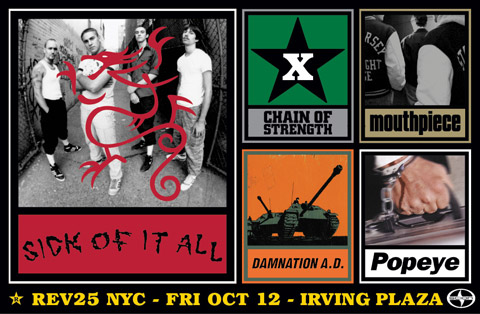 Revelation Records are celebrating their 25th anniversary big time with a couple of showcases. Like yesterday, here’s Jean-Paul & Mazzel Gijs’ report of day 2:

There would almost be no update from the second day of REV fest here in NYC. On the way back from Irving Plaza to our apartment I found out that I lost my train ticket during moshing to Mouthpiece and decided to hop on the train without paying. Too bad, cops saw me pull the trick and took me together with a German friend to an agency where we were stuck for quite some time, as I also didn’t have an id on me. In the end all worked out and we left with just a fine. Oh well, today is apparently not my day…

The second day of the showcase. Again a weird combination of bands are playing today. Kicking off with an acoustic set from Popeye. While most merch hungry kids were standing in line for the Chain Of Strength stand there was good background music for all. Popeye pulled of an entertaining set and played mainly Farside classics. “I hope you’re unhappy” gave me goosebumps and other songs were amazing acoustic. Most kids did ignore it, but for me a nice trip down memory lane. Definitely good (background) music for in a bar as well. For the fest itself it was in my opinion a little bit out of place. Would have been better to see the band Farside play.

It took quite some time before Damnation AD started their set. According to singer Mike DNA “they fucked up”. Maybe this explains why they only played two songs. Two songs that are not off their Revelation release. They started with “No more dreams” which lead into the “Dead march” and the song Palehorse and that was pretty much it. Yes, it was a very short set, but so brutal and so intense. What a band!

Mouthpiece, this is one of the bands that made me decide to go to the REV show case. Never had the chance to see them. So basically it took me over twenty years until I finally got the chance to see one of my favourite 90s bands. Mouthpiece started off a bit sloppy with the first song, but were really into it! They played pretty much every song they have ever written. The band that were from major influence on them was up next…

Chain Of Strength. It’s not a big surprise anymore since they have been playing a handful of shows recently, but shows in Europe are in the pipeline as well. That being said, I thought it couldn’t get any better after having seen the Chain playing a small venue yesterday with a max 200 capacity. Well, according to me we can easily conclude that their show today in Irving Plaza was even better than yesterday. What a party including Minor Threat and Dag Nasty covers! The only minus was that the breaks in between songs were a little bit too long which did no good to the overall energy of their set. Their drummer Chris is insane, but makes their set unique with his actions.

Last band on the bill Sick Of It All made all rumors come through. They played mainly songs off their first 7″ and the “Blood, Sweat, No Tears” album. Opening up with “Clobbering time” was where most fans were waiting for. NYHC style moshing at it’s finest. A lot of people already gave their best during Chain of Strength so it was less crowded as expected for this set. Only 3 songs were played from later records, “Step down”, “Us versus them” and “Scratch the surface”. Needless to say this was the show most Sick of it All fans from the early days were dying to see, including myself. But things come to and end and we are anxiously waiting for day 3.

Bands: Sick Of It All, Chain Of Strength, Mouthpiece, Damnation AD, Popeye, Farside