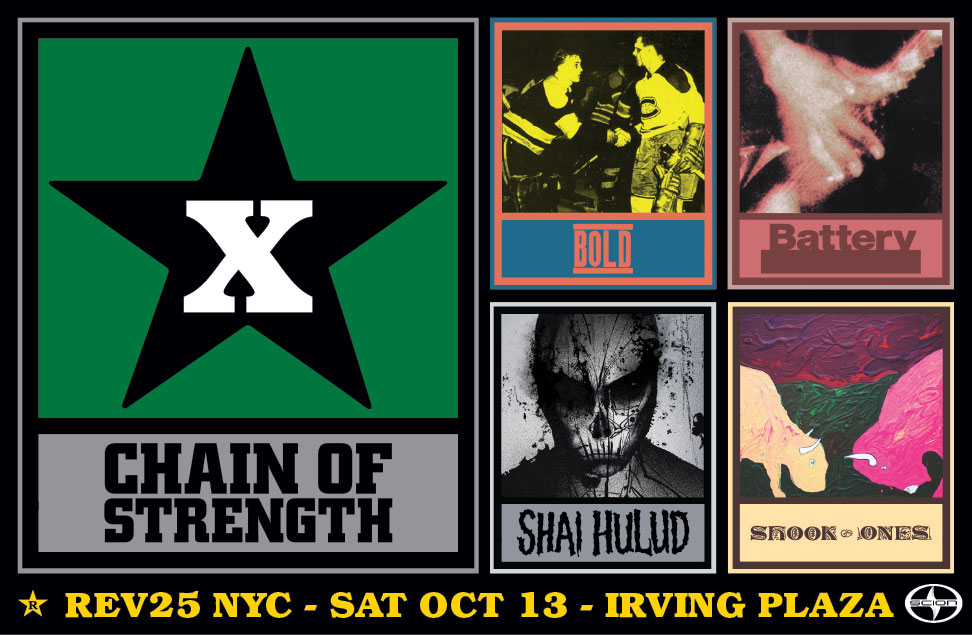 Revelation Records are celebrating their 25th anniversary big time with a couple of showcases. Like yesterday, here’s Jean-Paul & Mazzel Gijs’ report of day 3:

The afternoon power nap with the intention to sleep for just a bit almost turned out in missing the show. Happily I woke up around 8, so the damage is limited. We only missed the first two bands of night 3 at the rev show case. So yes, that we are no longer 20 shows off and I realize it.

When we arrived at Irving Plaza, Shook Ones already played and we got in right on time to hear the final Shai Hulud song in the hall way. Catched up with some overseas friends and went up front to see Battery, who played a very energetic show to say the least. Kids are totally into it, the band is having a good time and getting a lot of support from DC friends and family on stage: the best formula for a good time. Singer Brian is full of confessions and tells great stories about the past in between songs. The heartfelt speech about how hardcore changed his life in the song “Do you believe” was my favorite. Also remarkable was how brother Mike (from Damnation ad) is giving his younger brother a helping hand with singing. The Battery set was a perfect example of a show that was not even close to any of my expectations, so good. But when they started playing the “Young till I die” cover, the place litterally exploded. Too bad they didn’t play any songs off “Only the die hard remain”.

Bold started off in a very energetic way with the song “You’re the friend i don’t need”. By far the best Bold show i’ve seen ever since they reunited. Singer Matt is moving a lot more on stage. Has speeches in between songs and sings like never before, but I still need to get used to the adult sounding voice compared to the 13 years old one on the “Speak out” record. All in all a great set with a lot of songs of the “Speak Out” record. Aside from Porcell, Bold was performing tonight in the original line up with Drew on drums and John Zuluaga on guitar. Pretty awesome. In the middle of the Bold set they transformed into Crippled Youth and did a handful of songs the 7″. Definitely a great performance, which they ended with the song “Wise up”.

Chain Of Strength. Night three in a row. Very curious if they can still make it up to the other two shows. It’s going to be a hard task. Starting of today with a great intro from the John Peel BBC radio show, the tension in the room starts rising again. The “True Till Death” song during the intro is almost over, the feedback is already there and everyone knows what to expect. The Impact intro starts and the place goes nuts again. Just like yesterday they play the entire song instead of just the intro. It is a different show then yesterday. The atmosphere is weird at moments. The singer seems tired, but is still giving his best. From all three shows this is my least favorite one, but still great. All the same songs again including a Minor Threat and Dag Nasty cover as well. But it has come to and end and just like the Chain we end it with 3 words. Can you guess what they are?

And so day three ends as another great one. Something I didn’t expect at all, but totally overwhelmed by the bands.