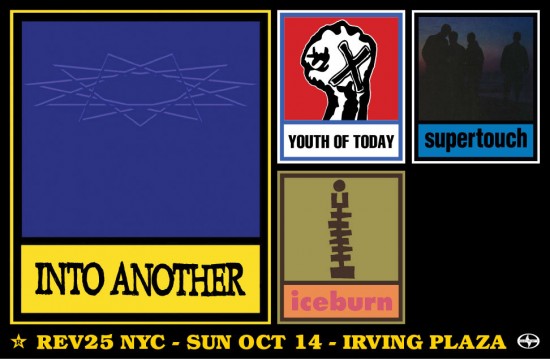 Today was another remarkable day during our one week stay in nyc. When were about to get into the city for food and hangs we witnessed a pretty bad accident right in front of our face. Since we all pretty much were live on the spot when it happened, some of us had to witness and explain to the cops what happened. Because of this we missed out on the Rumpshaker fanzine reading at Moo Shoes and did we finally have breakfast at two pm.

Iceburn. An 80 minutes set for an opening band? That might sound weird to anyone who is not familiar with this band. But, when you keep in mind that they wrote very long songs it kind if makes sense. I’m actually curious of how many songs their 80 minutes set existed. I only saw one of their songs which turned out to be their last song as well. I could not recall what Iceburn’s music sounded like on record. It’s been that long since I listened to one of their records. But seeing them live, they sounded more heavy than I would have thought. Kind of stoner rock or sludge? No clue how to define this band to be honest. These three guys are great musicians, know how to play and experiment with their instruments. It’s actually not bad, but must admit that their songs are too long.

Supertouch. I really got back into this band after they released a new 7″ on Reaper records. Ever since their European tour last year I changed my mind about this band and appreciated them more than ever before. During the Rev showcase they played a lot of the old songs. But also of their latest 7″ and the song off the Anti Matter compilation. Their show was solid, i hoped for a little more. The vocals were very out of tuneful through the set, but got a bit better by the end. Walter Schreiffels joined the band on guest vocals and sang the song the “Searching for the light” which he wrote and co-produced.

The Youth Of Today show basically starts from the moment they play “Take a stand”, the third songs of their set. Until that moment their show was a bit sloppy. They got some feedback but nothing outstanding. Last song of their set was minor threat’s cover “In my eyes”. Overall it was a decent show, but i’ve seen YOT a lot better in the past. As usual Ray pulled off a couple of great speeches in between songs. For example on how REV got started when he and Jordan were still in high school. And how they explained to others about putting out 7″ records with eight songs. Minus was that Ray obviously forgot lyrics to certain songs (f.e. “Can’t close my eyes”)

My second Into Another show with one hell of a remarkable difference. Back then in Europe I saw them play a show in Belgium for just a handful of kids. Today in NYC this same band is playing in a sold out Irving Plaza. It looks like Into Another finally gets the attention they deserved about 20 years ago. This performance was so good, by far the best of any of the other bands who played today. Both the grungy songs and ballads, it all sounded very tight. The place exploded when they opened up with “Underlord” and the crowd was singing along to all songs. They played songs from every record, so there was lots of variety, but no loss of energy during the switch from faster rock to slow songs. Ritchie was happy on stage and so was the rest of the band, who enjoyed the audience feedback to the fullest. Stoked that this band is back together!