Ringworm – Stigmatas In The Flesh 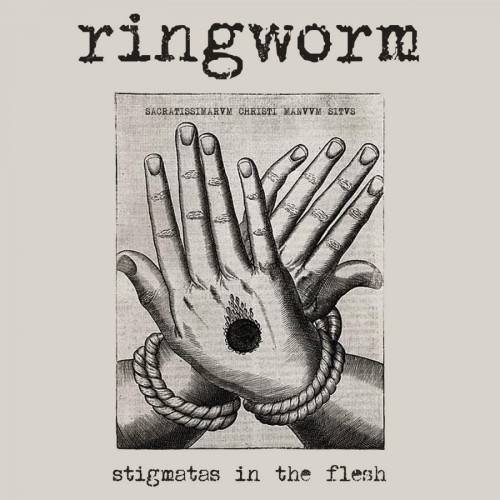 Stigmatas In The Flesh is the latest offering from Cleveland heavyweights RINGWORM, spawned via A389 Records from their 2010 anniversary show with Integrity and Gehenna. Featuring 15 live tracks from their extensive back catalogue, Ringworm’s bludgeoning style of metallic hardcore was painstakingly transcribed to electronic format by Kevin Bernsten (Developing Nations), then forcibly contained within the bounds of a 12” record for your listening peril.

Often, I find that live recordings, of hardcore bands, at least, sound a little flat and struggle to match up to the visual and audible stimulation of witnessing a live performance, but as vocalist Human Furnace asks the crowd if they’re ready to loose their minds before they open with ‘Birth Is Pain’, it’s immediately apparent that the recording quality here is soundboard. The soundman was evidently having a good night as the guitars are all leveled nicely against the drums in the mix, so none of the finer riffs are lost in the onslaught, over which Human Furnace sounds apocalyptic. The whole set clocks in at just shy of the 40 minute mark, so Stigmatas In The Flesh stands alone as a full length record very well, and includes a healthy number of tracks from the first couple of records for all those jaded old guys out there. The Promise sounds especially menacing on this recording, and the new material here sounds pretty good as well (shame it’s on Victory).

Overall, the only thing I can really say I’m disappointed with here is that I never got to see the physical copy of the record, as I know A389 Records are always very nicely put together. Having said this, it looks like this might be the closest I ever get to seeing Ringworm live as the only tour they’ve booked with UK shows in the last few years got cancelled, so while a live recording might not be as good as witnessing it, it’s definitely the next best thing in this case. If you’re a fan of the Clevo metallic sound, pioneered by bands such as, erm, Ringworm and Integrity, then this would be a good record for your collection.