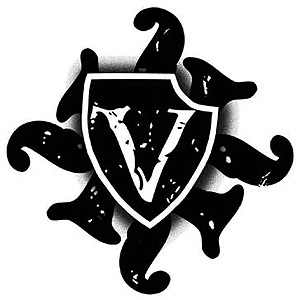 Rot In Hell have been a long time favourite of mine within the UK hardcore community. I should think that a lot of our readers are aware of them already, but for those who aren’t, Rot In Hell play a no-frills style of metallic hardcore heavily influenced by the Cleveland sound purveyed by the likes of Integrity and Ringworm. They’ve always made an effort to stay away from the trends and fashions that dominate the UK hardcore scene while producing some of the most vicious sounding music since The Promise came out back in ’93.It was with a heavy heart then, that I learnt vocalist Nate was to be leaving the band a few months ago, and this split with Vegas represents his swan song as his final track with Rot In Hell, released on Organized Crime Records (which are worth a mention if only for their re-pressing of the entire Integrity back catalog).

The seven inch features a track from each band, and Rot In Hell launch into the first side with typical reckless abandon. After a melancholic instrumental intro that could be straight from Those Who Fear Tomorrow, it builds to a peak and the band tears through the track ‘Armoured Gideon’ in just over 2 minutes, surprising the listener with the sudden, blunt audible attack. Nate’s vocals sound visceral and raw and the production compliments them nicely, the guitar tone sounding heavy while not over produced like so many other bands these days. The drums have a deep pounding quality to them and the riffs themselves are on point, as always. Typical Rot In Hell then, to anybody familiar with their sound already. In the months since Nate’s exit from the band, it has been announced that vocals will be taken over by Hans, the former vocalist of Belgian H8000 legends Liar. The band have played a lot of shows on the mainland since then but no recordings have surfaced so I will reserve judgment on that change until I get the chance to see them in the live setting.

This brings us to the Vegas half of the split. They weren’t a band I was familiar with, but a little research turned up that they’d put out records with other bands I was into and so I delved into their side of the record eagerly. For want of a better way of putting it, Vegas simply defies genre classification and taking any single track to try and pidgeon hole the band is probably a mistake. One minute Vegas are a charging juggernaut of punk metal noise, the next a lonesome, piano driven, acoustic folk act. The track on this split, ‘Time’ definitely falls into the latter category, being 3 and a half minutes of gloomy piano, acoustic guitars, and wailing vocals with a heavy amount of echo. There’s certainly a nice melody leading the whole track, which compliments the Rot In Hell side well, and it shows a much higher level of thought when it comes to song composition than a lot of your average hardcore/metal bands out there. However, if I could level one criticism at the Vegas side of the split, it’s that I wouldn’t have picked this particular track for a split that only features one track by each band. ‘Time’ is a nice display of what the band are capable of, but it never gathers any real pace, and if I hadn’t listened to their other material, I’d have had no idea Vegas’ alter ego was busy blending Cleveland hardcore with punk sensibilities. It sounds like it could be an interlude track on one of the records where Integrity were still experimenting with being weird. I do think that if it had built into some catastrophic apocalypse of noise like the other Vegas stuff I’ve subsequently heard I’d have really liked it though.

I’m a bit disappointed I didn’t get to see an actual physical copy of this release, as I know both bands are known for really making the effort with their packaging and artwork, and even though I wasn’t 100% sold on the Vegas side, I think you should pick this seven inch up.